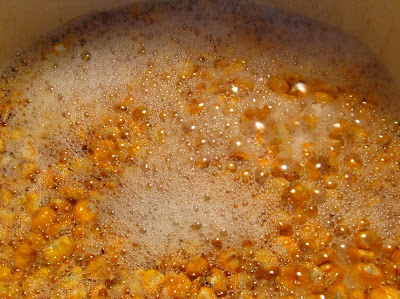 This is Part One of the pozole I am making, using Christina Kelly's native shortnose white corn, raised in Prospect Park last year. Follow her project at her website, Maize Field.
The hunt for cal/pickling lime/lye (calcium hydroxide) - specified in all hominy recipes by dear cooks who NEVER tell you where they purchased their cal - ended with my decision to try an alternative: baking soda/sodium bicarbonate/bicarb. Both chemicals loosen the husks and kernels of the dried corn and allow it to 'bloom' and become soft. Both are a substitute for the wood ash lye used by Native Americans.

I can now attest that baking soda works perfectly. End the tyranny of the lime dictate now! 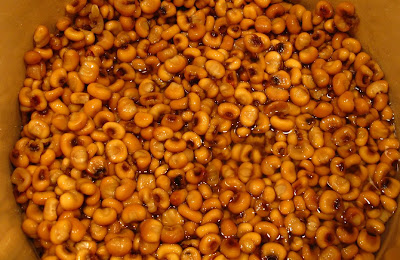 So, on with the show. I used this method, a hybrid of several with some of my very own fiddling thrown in. It yields tender yet firm hominy.

In a large non-reactive pot (enameled or stainless steel) bring the water to a boil. Add the corn and bicarb.

Keep at a simmer for one hour. Then let the corn stand in the hot water for another two, covered. By now the kernels will have plumped up and the coverings of the germs will be black. Pour the water off, and fill the pot again with cool water and rinse, stirring with your hands. Rub handfuls of corn against one another to loosen the husks. Pour the water off. Fill with water again and repeat. Pour off. Fill it a third time and let it stand for six hours or overnight. I skipped that step and it was a mistake, as the extra soaking makes the germs far easier to remove from the plumped-up corn. 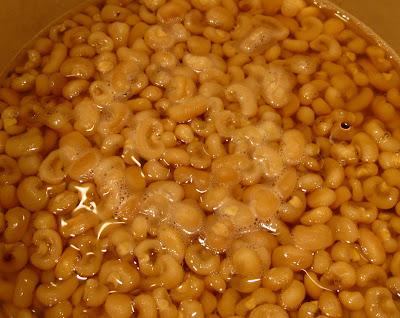 Now sit yourself somewhere very comfortable and prepare to stay there for the next few hours. It took me four, and I was able to watch movies at the same time. Just an idea. Put the pot with the corn in it in front of you, as well as a small bowl to catch the germs as you remove them. A damp cloth is handy for wiping your sticky fingers every now and then. 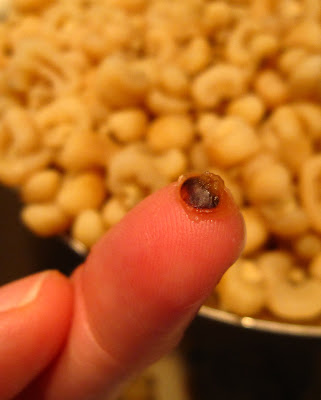 With your thumbnail, pinch out the germ from each kernel. It is covered by a little black sheath at the tip of the kernel. You will now have gap in the middle of each kernel, where the germ was. I found after cooking the hominy the next day that I had left some kernels in, after removing the black sheath - the germs are harder and nuttier and feel different from the rest of the kernel. True hominy does away with the kernel, hence the effort. 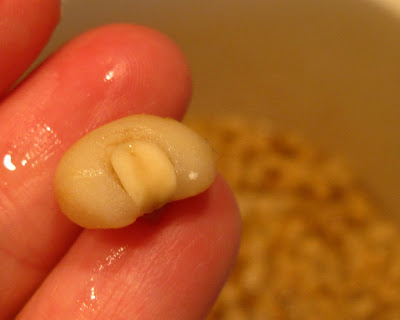 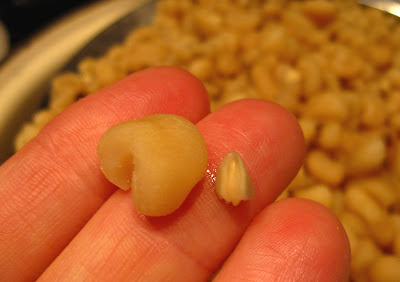 After this painstaking process, rinse the kernels thoroughly several times by filling the pot with water, discarding the soft husks that float up.

Your corn is ready to cook, now. Fill the pot with water again and bring to a simmer. Cook gently for about forty-five minutes, until the kernels are fork tender. 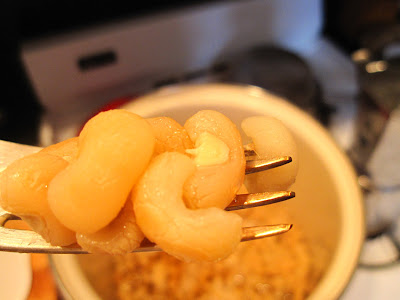 My hominy will be part of pozole (orignally made from chopped up sacrificial humans, but then pork after cannibalism was banned after the Spanish started bossing people around). But this lovely stuff can be served as side dish to practically anything, or eaten with maple syrup and milk. 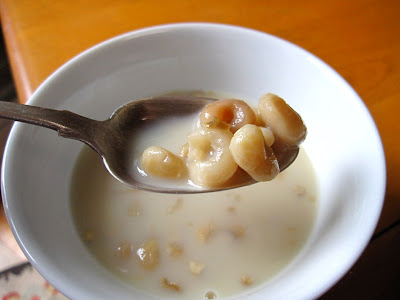 Would I do this for every dish?

But doing it once taught me what real hominy is and tastes a lot better than what comes out of a can. It also says something about how and why we cook, and what we bother to feed ourselves, and who lived here before most of us did.


- Two of the more interesting and informative websites that served as resources for me were Food Geekery (Jason - a man who started to cook in 2008 after needing to lose weight from 300lbs - used lime, and explained via Ric Bayless why removing the germ is important), and Amokhali Creek: - Wynne Eden, said to use baking soda as an alternative...but he did not remove the germs, just husks.