A bowlful of spring 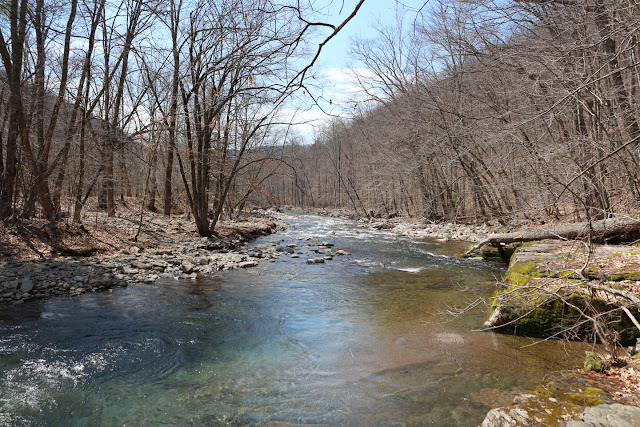 Dinner begins in a place.

If we could have an instant visual reference (reverence...) for all those places that are on our plate at any given meal, we would probably eat very differently.

But my first taste of ramps this season was sweet. I had picked them just few hours before, beside a clear mountain stream in woods whose trees were still bare and brown. In the leaf litter on the forest floor, early green life had begun again. Cutleaf toothwort, trout lilies, violets and wake robin. And ramps. Spotted by Vince, we knew I was thinking about them. They covered a part of the mountain in the valley where we had settled beside that rushing creek for a picnic. 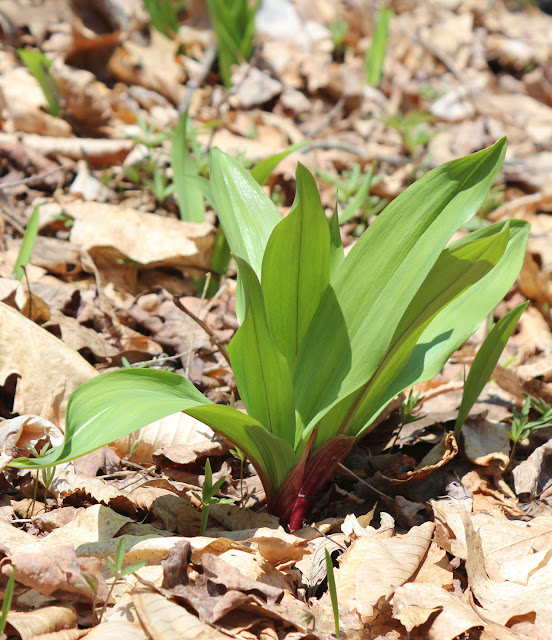 All my previous ramp experience comes from farmers' markets. Ramps - Allium tricoccum, also called ramsons - are the most ubiquitous and well known of foraged foods in the Northeast, so are easily available in their ephemeral early spring season. And where in the city am I going to dig a ramp? If I did find one, I'd leave it in deference to our beleaguered wildflower population. Unlike so many edible weeds I forage in the city, ramps are indigenous, and slow-growing. 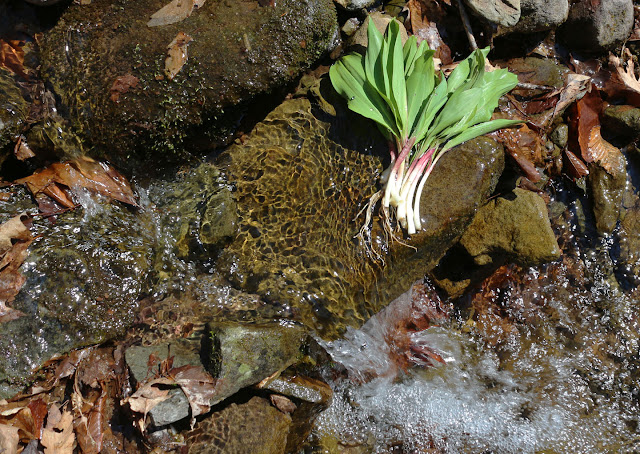 They are harder to gather than field garlic, my perennial spring favourite (whose flavour gives ramps a run for the money) in the city. The bulb lies deeper, and the stems that support the leaves are sappy and easily broken, so tugging on them simply breaks the leaves off, leaving the white part beneath the surface. I turned cave woman and found a good digging stick, rooting about in the soft but rocky soil and looking up every now and then whenever I remembered bears. I gathered a modest bunch from a massive swathe. A clean stream joining out creek washed the soil from them, and we drove them home to Brooklyn in our Zipcar, along with a bag of young garlic mustard. On the way I thought about supper. Vince was feeling a cold coming on, so ginger and chiles and soup were on my mind. 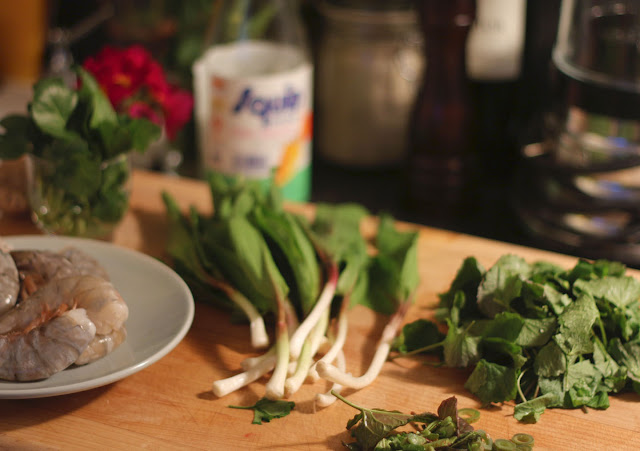 I decided to make a version of tom yum soup, the simple Thai preparation with a lime leaf base that can be awful or wonderful. I turned simple on its head, I am afraid, but the comforting and hot-sour spirit of tom yum still came though. This was wonderful. 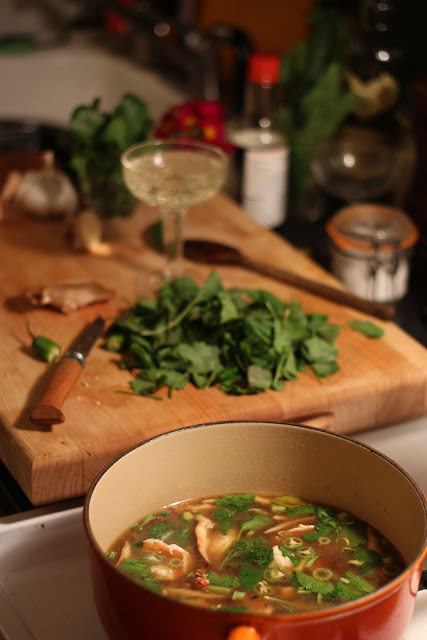 The result is one of the best things I have eaten, anywhere. It is complex in a sense, but sometimes complex is where you find the deepest layers of flavour.

For the Arctic Char

To make the broth:

In a small bowl marinate the shrimp in the juice of one lime.

In a pot on the stove over medium-high melt 1 tablespoon of coconut oil and toss in the shrimp shells. These will form the basis of your broth. When they are pink, squeeze over the juice of one lime. It will hiss. Add three cups of water and the fish sauce. Add the lime zest, lime leaves and ginger. Bring to a simmer.

While the broth is coming to a simmer, grease a baking tray with coconut oil, spread out the ramp leaves and lay the fish fillet on top of them. Drizzle the soy sauce and lime juice over the fish. Slide into the hot oven and roast until barely cooked, about 10 minutes. Baste once or twice. Remove, and keep aside.

After the broth has been simmering for about five minutes, strain the solids out and return the clear broth to the pot. Add the chile slices, the juice of the second lime, and the sugar. Taste. You are looking for a hearty flavor: salty, sour, sweet. Adjust the seasoning if necessary. Keep the broth hot over a low flame.

In a separate pan, melt two tablespoons of coconut oil over high heat and add the sliced shiitakes. When they begin to take colour, with brown edges, add the ramp bulbs and then the soy. Stir as the soy cooks off and caramelizes. When the soy has evaporated, deglaze the mushroom pan (with the mushrooms and ramps still in it) with a ladleful of the shrimp broth. Stir to remove all the good brown bits and then turn pour the mushrooms into the pot that holds the broth.

Bring the broth to a simmer and add the cleaned shrimp, then the mustard garlic, and finally the knotweed. When the shrimp turn opaque, it is ready.

To cook the char:

Meanwhile grease a baking sheet with the coconut oil.. Lay the ramp leaves on it. Place the char on top, skin-side and drizzle the soy and lime over the surface of the fish. Roast until it is just-cooked, which will depend on the thickness of the fish - but around 15 minutes. 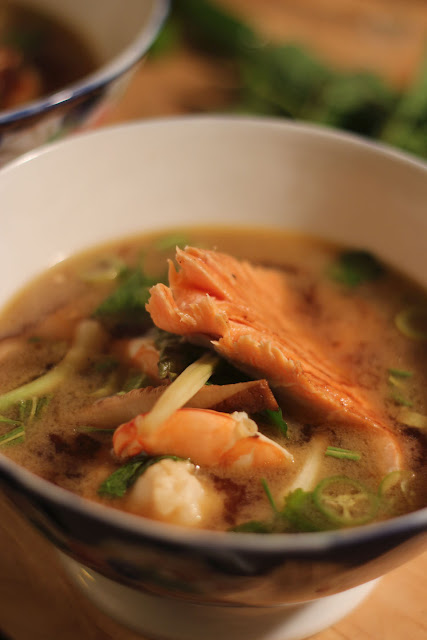 Divide the broth between two warmed bowls. Add some ramp leaves from the char's roasting pan. Top each bowl with small piece of the Arctic char, and another leaf or two of the roasted ramps.