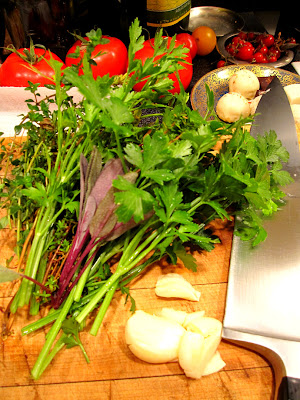 (for a substitute of rack of lamb omit sage and add rosemary; also roast 10 minutes/1lb)

One forgets about salt. Takes it for granted. Or pokes at it with a barge pole. But in its judicious use lies the Magic.

So chop all the herbs and in bowl mix them with the mustard and juice. Add the egg yolk just before you want to use the paste. It should all be sticky but compact enough not to slide off piste.

Chop the chives and add with the oil to a blender or food processor. Whiz or whir until it is a brilliant, even green. Then put it though a fine sieve, pushing and stirring all the oil through the leaves. Bottle in a sterilized jar and keep in the fridge. DO NOT keep unrefrigerated. Yes, the oil will coagulate, but that's OK. 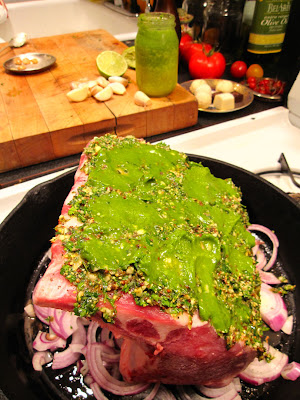 I had about 5 loin chops joined together, just over 4lbs. Feeds four, as the two of us left half behind, and we're not timid eaters. Note for the butcher: if he/she evens knows what this is, ask them to cut through the chine bone, so that when you carve the chops you are able to separate them one from another without the aid of colourful language and chisel. My Wholefoods butcher was unsatisfactory in this regard.

Slather the herb crust mix onto the meaty side of your rack of chops. Then add about 4 tablespoons of the chive oil, which in this case needs to be frigid to stick. Of course it will melt later. Arrange fruit and garlic around the meat Add a cup of water to the pan and keep this topped up after half an hour, to stop the onions from turning to charcoal and to encourage the beginnings of a good pan gravy.

Roast for about 15 minutes to the pound. Turn the heat down to 400'/200' after ten minutes. [Do not add a gratin of potatoes overfilled with milk and cream in the oven at the original temperature. Or there will be smoke. Lots of. Put it in at 400'F...]

After an hour (for the 4lb'er) remove the pan from oven, cover the meat with foil and allow to rest for at least 10 minutes on top of the stove. The juice will be reabsorbed into the meat, rendering it more tender than you might have expected.

For the gravy, I added some water and some mustard to the juices and onions in the pan, and stirred up the brown bits. Then I added a healthy splash of cream. 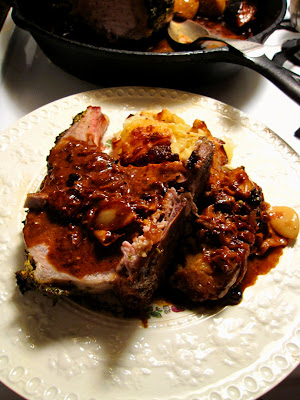 What would be referred to in South Africa as 'n bord kos. Lit. a plate of food, but implying heft. Substantial, brown fare.
Posted by Marie at 7:30:00 PM