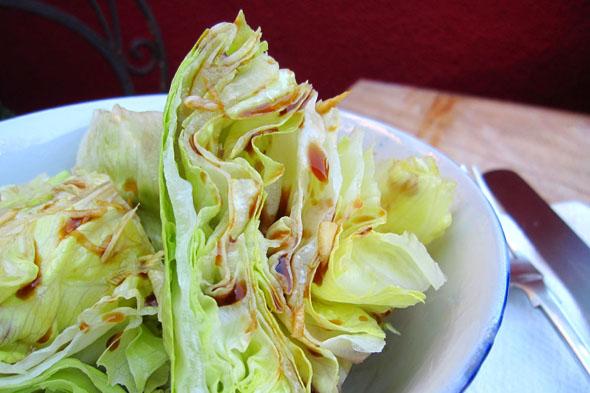 Time was when that's all there was. Iceberg.

Time came when Iceberg became an epithet. When it implied pale pink tomatoes, limp cucumber slices, dressing from a bottle and no culinary curiosity or know-how. It still exists in this guise in diners across the country, frozen circa 1968.

The arugula revolution took care of the Iceberg. Yet there it lurks in the supermarket and at the greengrocers', a pale green ball, a sullen time capsule of crispness, generally despised by serious eaters.

In 1926 Bruce Church, the founder of Fresh Express, found a backer to help him buy an entire field of Californian Crisphead lettuce and sent it by rail to the East Coast, covered in ice. A fortune was made and an era was launched. Legend has it that kids in Maine yelled, when they saw these ice-packed train cars, The icebergs are coming!

Fast forward, post 60's and 70's salad monotony. Thing is, once you are secure - hence free - in your knowledge that there is A Lot of Choice Now, there's actually a lot to like about Iceberg. It's incredibly crunchy. It's incredibly juicy. It's cheap! It has all those dense folds, like lettuce geology gone mad. A perfect landscape for capturing flavor. While it's retro de rigueur to dollop thick blue cheese dressing onto a boat-sized wedge in a steak house, I say let Iceberg be the blank canvas, and paint it with:
1 garlic clove, paper-thinly sliced and then into miniature matchsticks
1 finger (thumb, really) peeled ginger, ditto
2 teaspoons brown sugar
4 Tablespoons soy sauce
Half a lemon's juice
Put all the ingredients into a small bowl to macerate for at least an hour.
Then strain off the liquid and pour it over as much iceberg as you like, after cutting wedges out of the lettuce, and tearing the wedges into two. Pile in a bowl.
A great variation, when it is in season, is to add grated horseradish. Wasabi-like, the heat goes straight up into your forehead.
Below, the dressing. You can use the dregs - the soy-infused ginger and garlic - to toss with some chicken or vegetables to roast in hot-hot oven. 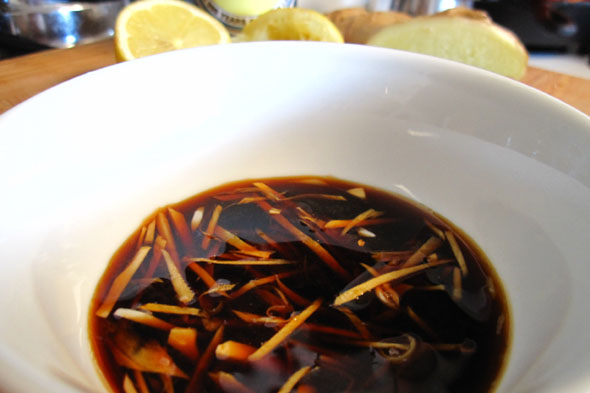