Lamb with yogurt and garlic 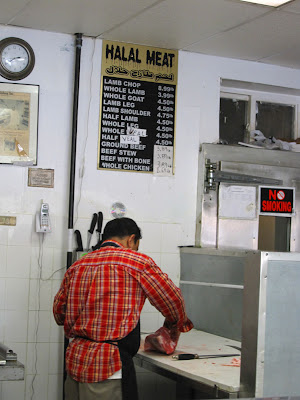 My Pakistani butcher on Atlantic Avenue is a different place from Los Paisanos on Smith. Bare bones as opposed to crown roast with frills. And the prices are very different, too. Here you find freshly slaughtered (so not not aged at all) lamb - as well as goat, which I've never investigated, veal and chicken. Not investigated, either. But all you see in the display case is lamb. Lamb. Lamb. Lamb. For a South African, the lambless American scene can be a bit of a shock. To us lamb is like potatoes. It goes with everything. And the price of lamb, when you find it, is more of a shock.

But a few years ago my friend Pierre Reveillez, a Frenchman who ran the wonderful little Le Kiosk on 1st and 1st before the city raised his rent, told me about the Halal butchery on Atlantic. He bought chops and merguez sausage here for a yearly party he threw at Le Kiosk for his customers and employees (the latter with whom he split his profits, incidentally).

Now I shop there once a month or so, sometimes more often, and have yet to see another Infidel doing the same. I like to buy lamb ribs, a staple in South African supermarkets, and impossible to find here. He thinks I'm odd, but cuts them up dutifully and off I go with a little black plastic bag for about $5.

Sometimes a whole lamb is wheeled in, in a red plastic shopping trolley. I notice that while I stand behind the counter, his Muslim customers stand beside him while he cuts up the meat. 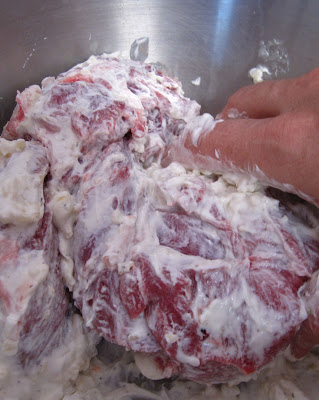 So I bought a little leg of lamb, 3lbs or so for $15. I had him debone it (he cut the bones and their meat into nice little chunks for me - at some stage I'll cook dolmades over them) and took it home where I rubbed some creamy Greek yoghurt into it with three finely chopped garlic cloves and about 4 sprigs of terrace oregano, chopped. Salt. It sat for a few hours in the fridge, and then I put it under a blistering broiler for maybe 8-10 minutes a side. Then it rested. Like God.
Snow pea shoots are a nice toy in salads. But you have to eat them with your fingers. 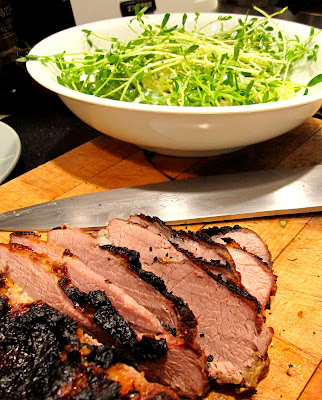 I fried up some potato and fennel salad from the day before, and had rather a primitive dinner. 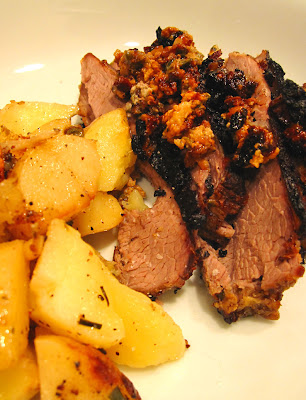 Email ThisBlogThis!Share to TwitterShare to FacebookShare to Pinterest
Labels: Lamb with yoghurt and garlic