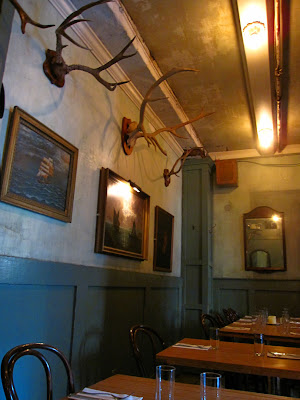 2 December 2009
I've always liked Freeman's, but I avoid it at packed times. I think I avoid everything at packed times. At noon in the week it is quiet. The stuffed animal heads are napping, the light is changeable as the sun breaks out from behind the clouds high above Freeman Alley. One can sit in the back room almost alone, for a while. I like the bar. It has a beautiful bar. And I like the food. 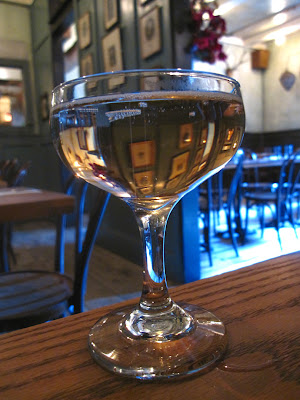 I have eaten artichoke dip in two places in my life. And...in two places in my life, if you follow.
At the top of Grouse Mountain in Vancouver, on a cold October night, after Vincent had asked that loveliest of questions. We sat in the log-ceilinged lounge overlooking the lights of distant Vancouver far below, and ate artichoke dip and drank beers, and were very happy. When we went back months later, the dip was gone, and no one remembered it.
And in this city, in Freeman's, artichoke dip! I suspect it is ironic, in New York. It is not ironic in Vancouver. In Vancouver they mean it. Wherever it is, I love it. The Freeman's version is finessed, but all the cheesy, hot, smooth and facile goodness is there under its bubbling surface and the pile, yes, pile of toasted baguette beside it, warms the heart. It costs $10 and the portion is more than you want for your lunch. But you eat it anyway. 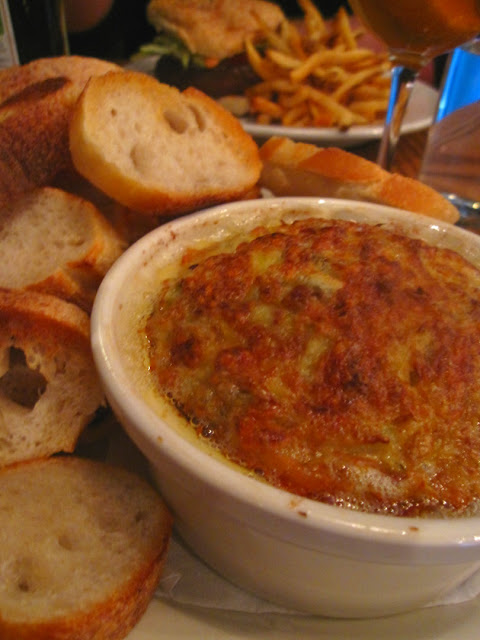 My version:
2 cups canned, chopped artichoke hearts (I put them in a food processor and pulsed a little)
1 cup parmesan, finely grated
1/2 cup mayonnaise (some recipes call for a full cup, but...gag)
Squeeze of lemon juice
Black pepper
Whizz or mix these well. Put in ovenproof crock and heat at 400'F till bubbling and golden.
Serve with toasted baguette slices. Or raw vegetables (carrot, celery, Belgian endive are good).
Posted by Marie at 4:12:00 PM