I used to hate scrambled eggs. I swear I remember sitting in the old breakfast nook at 54 Paul Roux Street - it was the 70's: picture orange and brown and formica - and not being enticed by flying spoonsful of pale, wobbly scrambled eggs going, Wheeeeh into the hanger, which remained firmly shut. I trusted my mother but she was just wrong about scrambled eggs.

They were not food.

The first time I remember eating them voluntarily and with anything approximating pleasure, was on the patio in Constantia, in winter, and I was in my early 20's. It was one of those sparkly blue Cape Town days with the poplars bare in the greenbelt, and the garden very green. Bevan was there, wearing a Panama hat, and so was Marylynn, in sunglasses and hat, and Frederic, and my mother and father. I don't remember the occasion. It may have been post my flight from Alexandria, VA. There is a picture of me with long hair just cut, and the black and white cat Garfunkle upright on my lap - he would soon after succumb to a Staffordshire terrier.

We had vodka, neat, frozen in a hunk of ice, to drink from shotglasses, and there was a salad of rocket leaves and orange slices, and then there were scrambled eggs, with smoked salmon on the side. I remember the two heavy pans of eggs being rushed to the table outside, and being told by my mother to eat them at once. They were a revelation: creamy, only just set, delicate, moist.

I'm sure the vodka helped.

And that is the thing. To eat them at once, and to cook them until they are barely done, and to refrain from molesting them in the pan.

Two things will tell you about a restaurant: salad, and eggs. I adore salad, I adore eggs; and the number of times both are violated is astonishing. But that is another story.

I made one batch in Vancouver for Vince, and erred in fiddling with the eggs: Stir, stir. This broke them up and made them very sloppy. The second time, I lowered the heat, poured the 6 eggs and splash of milk, beaten, into the buttery pan in which some transparent slices of garlic had turned soft, and waited. When the sides turned pale I slowly lifted them and allowed the uncooked mixture from the middle to run underneath, and so on until they were au point. Then I added some fine parmesan and chopped spring onions (scallions), and tipped them onto waiting slices of ciabatta, rubbed down with a garlic clove. And then we ate them at once. 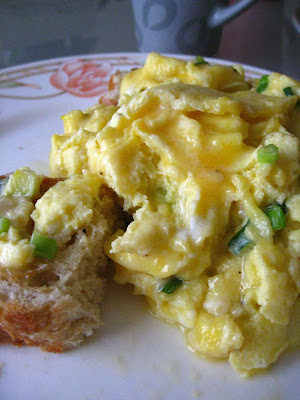 And this is how Vince likes his butter. With some bread. 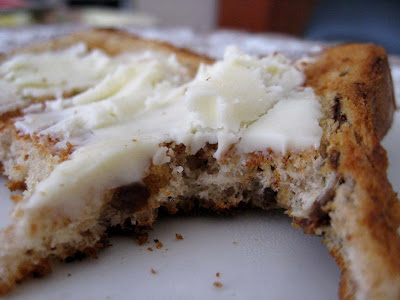