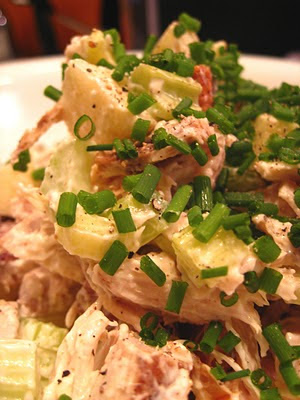 We're just out of Waldorfs...

...says an insouciant Basil Fawlty to the Loud American, who is demanding a Waldorf Salad.

Lest we forget the good things that the US of A has given the world, a small reminder: Waldorf Salad.

It was a main feature of a picnic we would have annually at Dias Beach at Cape Point outside Cape Town. The rest of the menu, for a brunch, featured unvaryingly: small smoked salmon sandwiches on brown bread without crusts, tiny pork sausages, grilled, with grain mustard for dipping; fresh scones with home made strawberry jam inside (! the convenience! - and in January my friend Fran reminded me that I used to whip these scones up so that our pack of friends could enjoy tea, out of teapots and China cups, on Clifton Beach); and the fixings for Buck's Fizz, here known as Mimosas. Champagne (domestic warkling spine, in those days) and orange juice. Plus flutes to drink from. I There was also hot coffee, in flasks.

This was all packed into many baskets and off we would go in the Kombi, with the Collins' in tow, usually, or other good friends. The Corbets, the Van Heerdens. Some of whom are not with us anymore. There had to be many people so that the picnic luggage had a proper train to carry it down the long cliff-top path and the sudden, steep descent to the empty, cormorant-populated beach, white-smooth with the black birds scattering in formation from it as we arrived, and pounded by dangerous blue breakers.

There is a boardwalk above Dias Beach now, and baboon minders with catapults to scare off the marauding primates. But a few years ago we repeated the picnic with the Collins' again, fresh from London; the small girls now grown and beautiful women, me no longer a paralysed teenager. All of us older, the menu the same as ever, the beach as empty.

So, this Waldorf salad is a take on a recipe I read a million years ago in Cape Town, in a moth-eaten Gourmet or Bon Appetit, per the Cafe des Artistes (shuttered after the summer of 2009) on the Upper West Side.

I read it never guessing I would live in this city, or eat at that restaurant. It adds chicken to the original formula. Real Waldorf salad has no chicken in it.

This is mine and it is retrolicious:

One poached chicken breast (I used leftovers from a roast chicken), cut into bite-sized chunks
3 ribs celery, unstrung (...) and sliced thinly
one apple diced
a handful of fresh pecans
two tablespoons mayonnaise
a shake of sherry vinegar
some salt, pepper

Combine everything in a bowl and toss with your lily white or chocolate brown hands. Either lick or wash them clean. That's it.

Snip some chives over the top for green dusting.
Posted by Marie at 5:58:00 PM