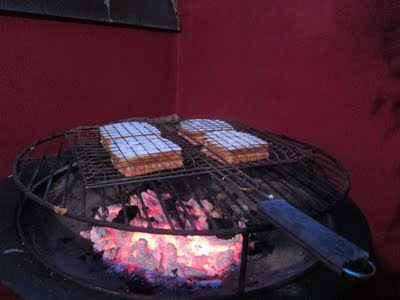 This is not a recipe as much as it is a prescription. In this ole' US of A we do not have white 'government' loaf, that rectangular brick of solid white bread sold in South Africa in whisperthin plastic bags. Bought by the half loaf by bergies (mountain people - actually city homeless, who may retire to the slopes of Table Mountain to sleep) in the form of a bloutrein (blue train) - that is, soaked in methylated spirits.

Here, you need Wonderbread. Yup, I said it. Wonderbread. This is not a platform for good sourdough or chewy baguette. I like Wonderbread (the wonder is at the ingredient list and remarkable, consequent, pillowy softness)  and I will eat it once or twice a year in an emergency. Toasted cheese on the braai is the response to an emergency of homesickness. It is like taking a pill to stop the jitters. I imagine.

So. For one broodjie, you need two slices of bread. Butter one side of each. Slice some cheddar cheese, lay that on an unbuttered side. Slice very thin slivers of onion, lay those on top of the cheese. Crack some pepper over. Cover with the other slice, keeping the buttered side on the outside. When you have four sandwiches you put them in wire grid, clamp it shut and toast over well-ashed coals until golden on the outside and molten on the inside.