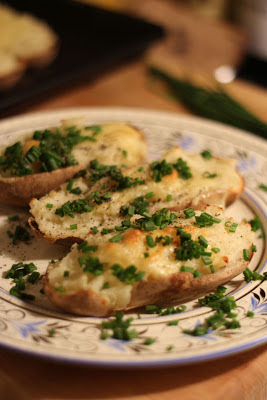 Is life too short to record a baked potato recipe? Yes. Then again, sometimes we forget about uncomplicated food.

With Vince in Montreal, I regressed. He loves uncomplicated food, but I suppose the performer in me feels the need to put on a little show every evening, when he's home.

So the other night I made these for myself for supper. They are an ageless comfort food, the kind you roll out against the sadness of a Sunday night (school next day, horrible blue uniform, death in the classroom...oh, wait, that's over), or when you think no one else is looking. They are unimpressive, and starchily soothing.

Quantities are highly variable, but if you use those enormous, log-sized Idaho baking potatoes, I'd say go for it and give yourself two, which will mean four halves.

Supper for One (or half a supper for two)

Bake the potatoes at 400'F/200'C until tender inside and crisp on the outside - about one hour.

Cut them in half and scoop their insides into a bowl, leaving the shells intact. Add the butter to the hot potato in the bowl. Meanwhile warm the buttermilk or milk gently with the garlic in it. Remove the garlic.

Now mash the potatoes and butter in the bowl with a fork or masher until smooth. Add the buttermilk slowly, stirring with the fork or wooden spoon. Add the cheese, stir well, and taste. Season with salt and pepper. Stuff this filling back into the potato shells. Top each halved potato with a slice of cheddar and slide back into the oven for 20 minutes or until the tops are beginning to turn golden.

Snip the chives over them just before eating. Apply freshly ground pepper.

Variations for the potato mixture:

If someone felt like sending me a truffle, I would shave it very lovingly over my baked potatoes.

I would know what to do with that, too.