Chicken with grapes, sorrel and thyme 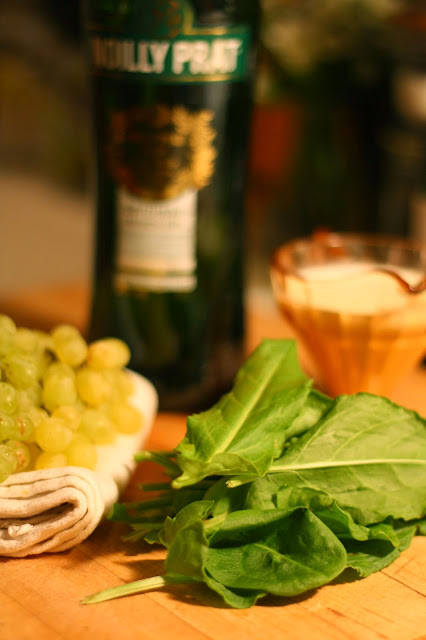 When I was a teenager in Cape Town I heard a snippet of an interview on the radio, which is always switched on in my mother’s kitchen (I do the same thing, now, when I cook in Brooklyn - the dial turned permanently to WNYC). All I remembered afterwards was “chicken, grapes, wine.” This was conveyed to my mother. And so a dish was born, interpreted by my mother and later by myself and evermore a classic in our repertoire of recipes. Grapes and roast chicken are another variant. I have no idea whose it was, originally.

And October in New York is grape season. Real grapes. Not day in, day out grapes, pure sugar without character. If you are lucky, you will find Muscat, a very late ripener. For these I used local Thompsons. Not bad at all.

Thyme and grapes are a surprisingly good match. The herb's flavour is very clear over the mild sweetness of the fruit. I often use vermouth instead of wine and for this recipe I added sorrel, too. The rooftop sorrel has recovered from the hot summer and is sending out tender sour leaves again.

If the grapes are very small, they may be left intact, though cutting them in half allows more juice to escape into the sauce. If they are huge, with big seeds, prick those out with the tip of a sharp knife.

Heat the oil in a saucepan over medium-high heat. Add the chicken breasts, giving them a wiggle to prevent them from sticking. Cook until the first side is golden with brown bits and the breast is turning white and opaque on the sides, —about 3 to to 5 minutes, depending on size. Turn and cook the other side for the same amount of time. You want the breasts to be slightly underdone at this point.

Increase the heat to high. Add the vermouth, the grapes, the sorrel,  the thyme leaves, the cream and the squeeze of lemon. After the immense sizzle has died down, turn the breasts and cook at a simmer for a couple of minutes, until the grapes are opaque and the sorrel turns that wonderful camouflage color (covering the pan helps). Remove the breasts to a plate to rest. 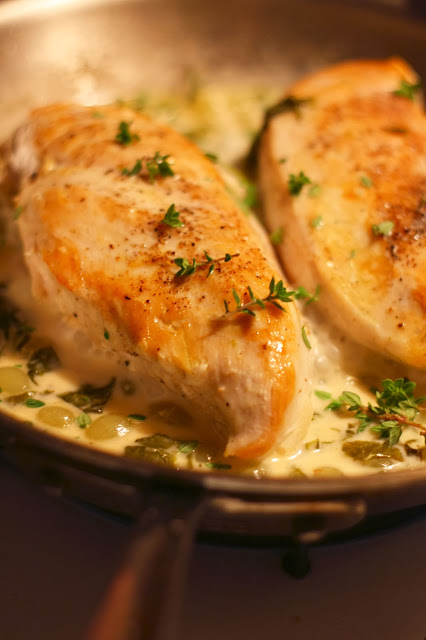 Continue to reduce the sauce - over medium heat - until it is slightly sticky but easily pourable. Taste, and season with salt and pepper. Carve the rested breasts into generous slices. Return the slices to the saucepan, spoon some sauce and grapes over the top, and serve them from the pan at table. 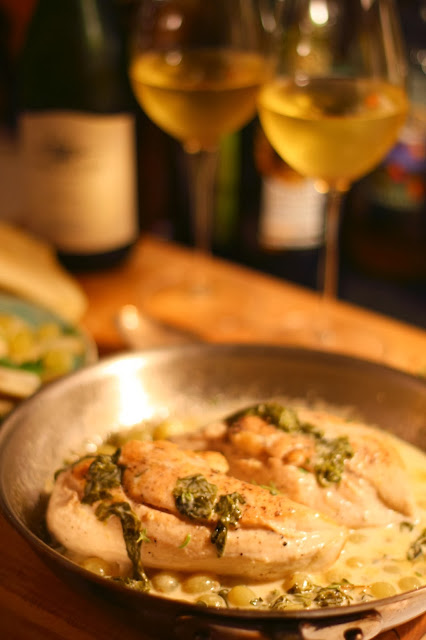 Accompany the chicken with a heap of grains of your choice, or give them a side of tender, buttered egg yolk noodles. We often eat them with nothing but steamed broccolini, a Henry Street habit (the only organic chicken breasts in the neighbourhood come from Trader Joe's, which also sells the only organic broccolini. We buy nothing else there, so the two seem to go together).

Email ThisBlogThis!Share to TwitterShare to FacebookShare to Pinterest
Labels: Chicken - breasts with grapes and thyme, Chicken with grapes, Grape and thyme sauce with seared chicken breasts