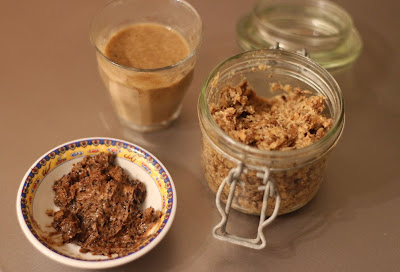 Thinking of ideas for low-fuss treats I could take to the WNYC studios for an interview about maitake (aka hen of the woods - Grifola frondosa), recently, pâté seemed a good idea; travels so well in jars.

Pâté is something I grew up with. It was a normal part of our eating lives. My mother's chicken liver pâté made frequent appearances at dinner parties and picnics, and later it became deeply complicated with mousse-y terrines whose fat content was staggering.

This mushroom pâté may as well be called a spread. Cos...ya spreads it. It was surprisingly complex in flavour. A fall mushroom and a fall drink (cider) seemed to go well together, and the addition of a little lemon juice prevented the result from being cloying.

(I've made it subsequently with sherry, which works perfectly.)

Yes, you may substitute other mushrooms.

Saute the shallots and maitake in 3 Tbsps of butter over medium-high heat for about 10 minutes, until they start to lightly brown. Cover, and lower the heat. Cook gently for 10 to 15 minutes, stirring from time to time - this will draw out their moisture.

Remove the lid, add the bay, the juniper, and the cider or sherry. Stir well to scare up the brown bits.

Allow the liquid to cook off completely, then add the cream and stir well again. Lower the heat to medium. Cook gently for another 5 minutes. Add the squeeze of lemon. Taste, and season quite highly with salt and pepper. Remove the bay leaves and juniper, and blend to a rough paste in a food processor. Add the last 3 Tbsp of melted butter with your last whizz.

Serve at room temperature, to spread on good brown bread or crackers.