How to make hominy 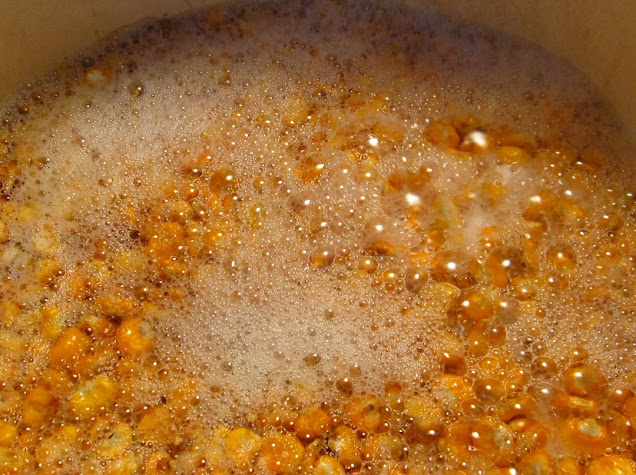 [First published 10 September 2010. Updated 29 November 2021]
What is hominy? Properly prepared, it is nixtamalised (alkali-treated), cooked dry corn (usually dent, but also flint/field corn) whose skins and germ have been removed. Its texture is luscious and its scent is rich and honey-like.
Hominy is an essential part of pozole, a stew whose Aztec origins may have required as an ingredient chopped-up sacrificial warriors. Now, pork has to suffice.
And for a vegan version I'd use roasted squash, added very late so it doesn't become too soft.
This hominy-step is Part One of the first pozole I ever made, using the artist Christina Kelly's native Northeastern shortnose white corn, raised in Prospect Park in 2009.
The hunt for kal/pickling lime/lye (calcium hydroxide) - specified in all hominy recipes by cooks who never tell you where they purchased their kal - ended with my decision to try an alternative: baking soda. The chemicals loosen the husks and germs of the dried corn, make more nutrients available, and allow it to 'bloom' as it becomes soft. Native Americans would have used wood ash lye.

Luckily, baking soda works perfectly. Still, it's a commitment, in terms of process. 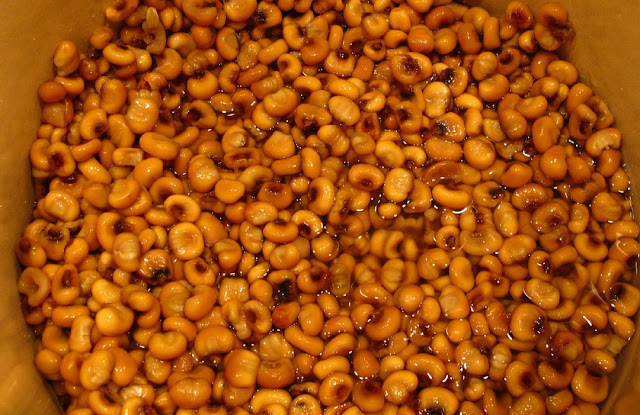 On with the show. This method is a hybrid of several I found online and in books, and evolved with subsequent practise. It yields tender yet firm hominy, whose flavor is wonderful. Begin two days before you intend cooking the pozole. There are tow long soaking periods.
2 cups dry flint corn (yields about five cups, cooked)
8 cups of water
3 Tablespoons baking soda (sodium bicarbonate)
First Two Soaks:

In a large non-reactive pot (enameled or stainless steel) combine corn and water. Bring to a boil, and add the baking soda.

Keep at a gentle simmer for one hour. Then let the corn stand in the water until cool. By now the kernels will have plumped up and the coverings of the germs (at the narrow tip of each kernel) will be dark. Pour the water off, and fill the pot again with cool water and rinse, stirring with your hands. Rub handfuls of corn against one another to loosen any skins. Pour the water off.
Cover the corn with water again and let it stand for 12 hours or overnight. Drain. 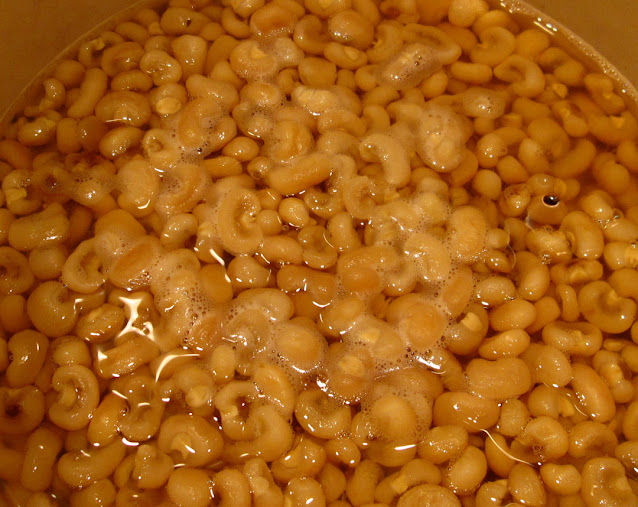 Now you're going to remove the dark covering that protects each germ. 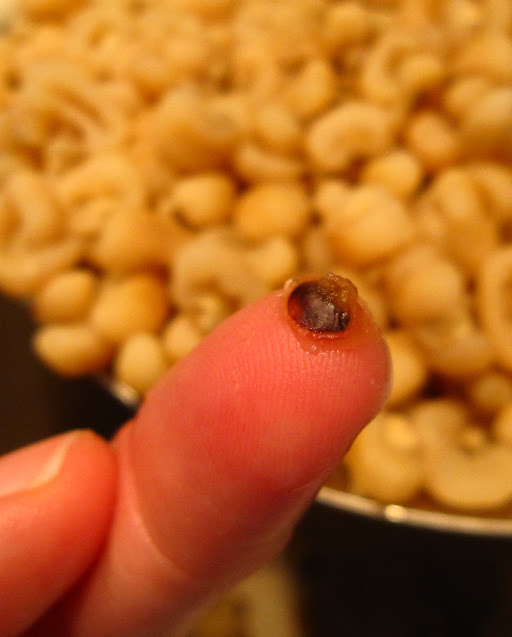 With your thumbnail, pinch off this little black sheath at the tip of each kernel. It covers the germ, which is like a tiny backbone in the kernel. When you have removed all these sheaths, soak the corn for another 12 hours, then drain. (You can try and skip this last soak, and wiggle out the germ at the same time as the sheath-removal, but it's much looser and easier to remove once the sheath is off and the corn is re-soaked.) 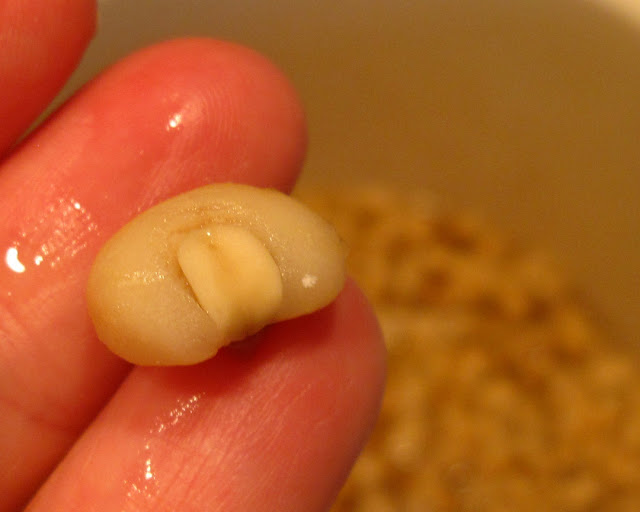 The germs swell up after that last soak. They feel harder than the rest of the kernel. True hominy does away with this kernel, hence the effort. 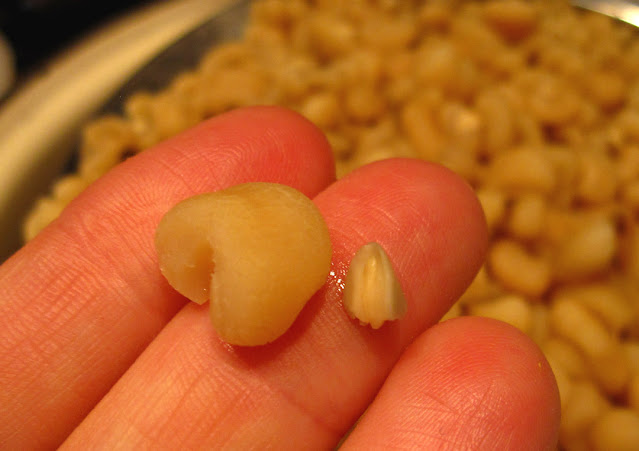 Wiggle out the germ. You will now have a thin groove in the middle of each kernel, where the germ was.
After this painstaking process, rinse the kernels thoroughly.

Your corn is ready to cook! Fill a pot with water again, add the prepared corn, and bring to a simmer. Cook gently for about forty-five minutes, until the kernels are just fork-tender. 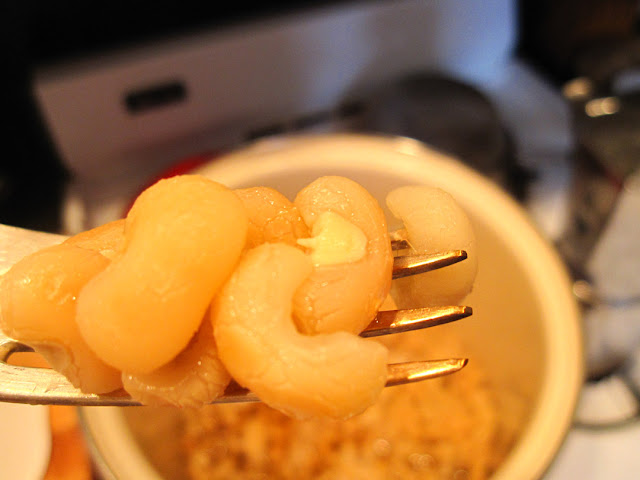 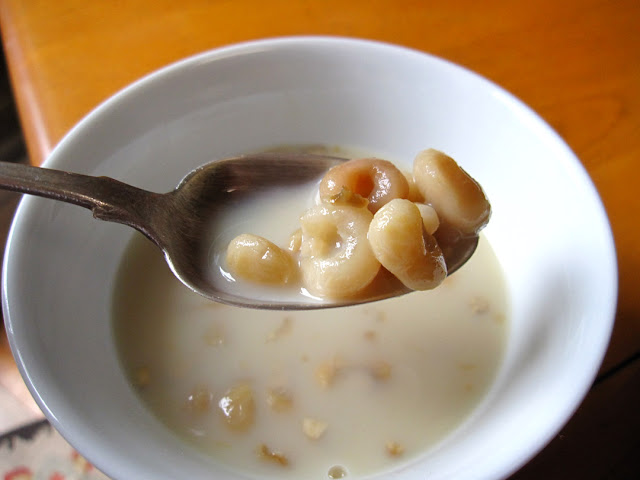 This lovely stuff can be served as a side dish to practically anything, or eaten with maple syrup and milk. Or you know, next step pozole.
Would I do this often?

But the real deal tastes and feels so much better than the canned versions. It also says something about how and why we cook, and what we bother to feed ourselves, and who lived here before most of us did.