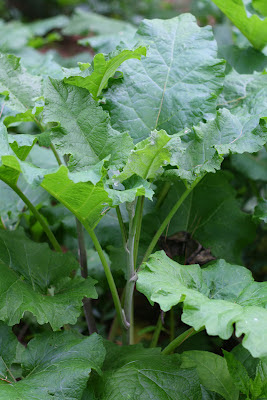 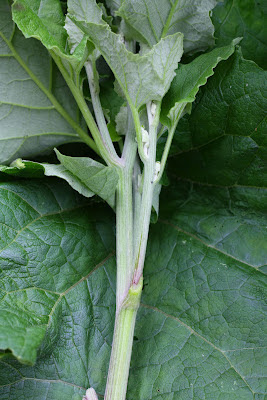 When I headed off on walkabout recently I was hoping to find these: the young flowering stems of burdock. Some plants, with lower leaves reaching lengths approaching three feet, seemed clearly to belong to greater burdock - Arctium lappa, but I need some more skills to differentiate between those and lesser burdock, Arctium (predictably) minus. Both have edible stems and taproots, but the latter are way too much trouble for me. Weed or no weed I do not have the manly package required for wielding a digging spade and unearthing a root several feet deep in the middle of a New York City park. That is just begging for attention.

The West Indians resting on benches nearby were the ones paying polite if wary attention to me. White lady cutting plant stems and putting them in a bag. Conversation-worthy. For good measure I also collected some leaf-stems. I have an idea they might pickle well.

I had collected burdock for the first time here two weeks before, and so had some experience of the taste, texture and possibilities of the stems. In short, I liked it, and was back for more.

It is cultivated as a root vegetable (gobo) in Japan. Stateside, it is considered a weed. The stems are produced on second year plants. The first year all you see is those great, soft leaves, but the first year plants have the best roots. They say. 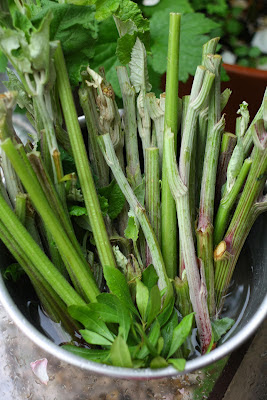 Above, this week's collection, with some bayberry in front. I have not prepared them yet - that will happen today. Lucky Frenchman. More wild food for dinner. The burdock stems ranged in height from 12 inches to three feet, the latter with tough bases, which I left behind. If the knife slipped through easily I figured it was tender enough for cooking. Ever seen the inside of an artichoke's stem? Paler than the dark green skin? I have eaten those, often. Burdock stem is comparable, with a firmer texture, and a little turnip thrown in. 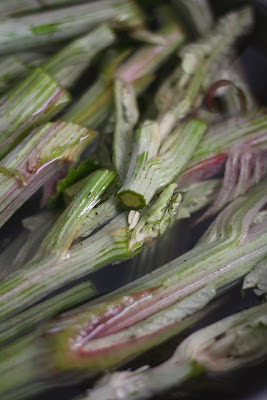 You do need a free half hour, minimum, to clean a bowlful. All the tough green strings must be removed to reveal the juicy white heart of the stem.A pre-dinner drink helps. This is a worthwhile endeavour, though, as this is a food whose appeal goes beyond the strange and interesting. It tastes good, adapts well to one's cooking techniques and is nutritious. If you care about that sort of thing. 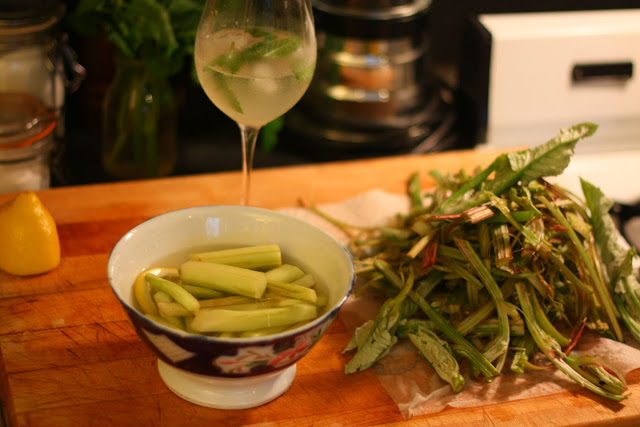 In Cape Town I prepared a dish of artichokes barigoule, from a recipe by Roger Verge, not really understanding the term. I thought it must describe the sauce, which is the result of braising the artichoke hearts with bacon, onions, garlic, carrots - classic aromatics, and sometimes bacon. But according to Larousse (the Internet was no help) it refers to the Lactarius genus of mushrooms, with which the artichokes are stuffed, in the south of France. Ha. Fascinating. Thank you, hardcover book, with real pages.  Well, I had no milk caps (pine rings, in South Africa)...so this cannot be barigoule, strictly speaking. Nor can it be a la Grecque, as that lemony and olive oily dish is usually served at room temperature and we ate our burdock hot. Burdock sans Barigoule  a la demi Grecque? French speakers may now come out of the woodwork and beat me. 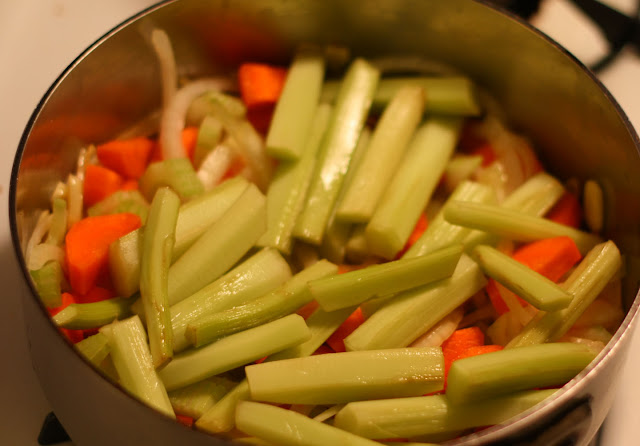 Braised Burdock, for Two, then: ( you can do this with artichoke hearts)

3 strips of pancetta or bacon, cut into smaller pieces (omit of you're vegetarian, of course)
1 Tbsp olive oil
1 medium onion, finely sliced
3 cloves garlic, crushed half heartedly
2 medium carrots, cut down the middle and then into half moons, or as you like your carrots
2 sticks celery, strings peeled and cut into thinnish slices
3 cups peeled burdock stems in 3 inch batons
4 sprigs of fresh thyme
1/2 cup fruity white wine
Water
2 medium potatoes (if you are afraid, as I was, that you will still be hungry), cubed
1 squeeze of fresh lemon juice
1/4 tsp sugar
Salt and pepper

Over medium heat cook the pancetta or bacon till fat starts to run. Add the olive oil and then the onion and garlic and saute till glistening and translucent, about 4-5 minutes. Add the carrots, celery and burdock. Cook until they take on a little colour. Now add the wine, thyme, sugar and enough water to cover the vegetables. Season with salt and pepper. Cover and bring to a simmer. Keep it at a gentle simmer for half an hour. Add the potatoes. Cook another 15 minutes and then pierce the potatoes with a sharp knife to test for tenderness. If they are tender uncover the pan and continue cooking at slightly higher heat to reduce the cooking liquid. Add the lemon juice, stir and taste again. Adjust with a little more sugar or salt if necessary. Continue cooking until the juice has all but disappeared and turned rather sticky and intense. 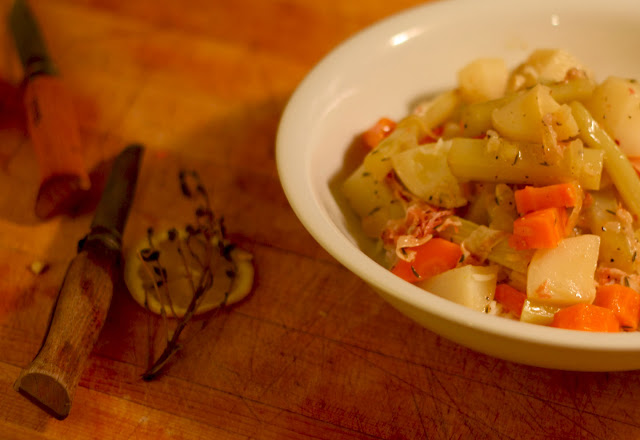