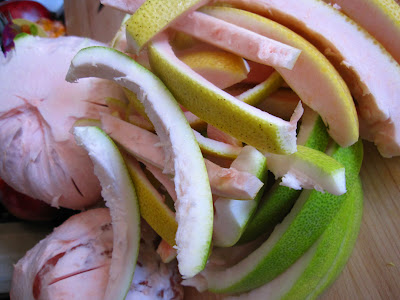 I peeled two of the Chinatown pomelos and followed this recipe by Jacques Torres, later finding that Smitten Kitchen had done the same with poor results - she said they were inedibly bitter! [Torres on the Food Network and Smitten are 1 and 2 in Google search results for Candied Grapefruit Peel...]. Luckily I did not have the same problem. And I don't know what caused hers.

I was worried about the large proportion of pith on my peel, and decided to keep it, despite the bitter! alarm bells. I changed the water 4 times, as directed. While mine are not the prettiest crystallized peels ( I was busy with other things and let them stand in the dusting-sugar too long, so some jagged bits developed) they are delicious. A little bitter (which I like), but more a memory, and very succulant, with a crackly crust of sugar.

But they take a long time. I think it's worth it, though. What nice Christmas presents. If you really want to be silly, dip the ends in good dark chocolate.

Having succeeded with these, I feel I am on my way to making Aquagrill's peerless grapefruit dessert, and my favourite dessert, ever: pink segments topped with a confit of candied grapefruit skins, surrounding the lightest, ethereally pink grapefruit sorbet. It is crowned with a ridiculous, superfluous but artfully poised chocolate biscuit swirl (looking a lot like the hat the mother of the bride wore many moons ago in Cape Town, resembling rather closely an alien spaceship perched on her head, at a wedding I was apparently not welcome to attend, despite having been invited, while she asked belligerently and loudly whether I was actually staying for dinner. It all remains a mystery to me. I remain traumatized, she remains mad. Everytime I see that teetering swirl on the dessert I think of her. So I remove it carefully and don't eat it). 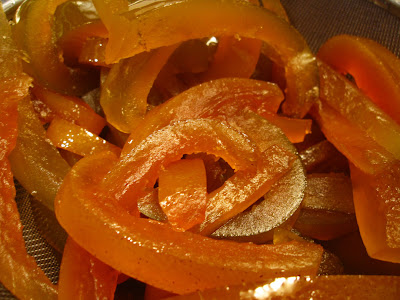 Above, draining the slices after they have cooked in several changes of water. Drying on racks, below, after having been submerged in sugar. I used organic sugar so it's a pale brown colour.

Bitten, the white, bitter pith has been transformed into soft, unctuous, citrus-redolent sponge under a crackle of sugar. 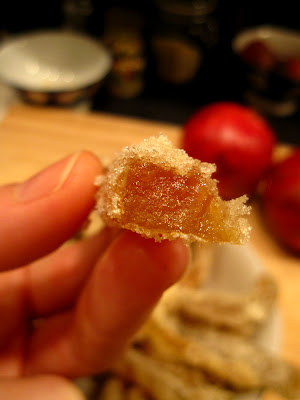 Somehow I feel that a nineteenth century physician may have prescribed these. For something. Relief of a lady's headache, associated with the umentionable time of the month? 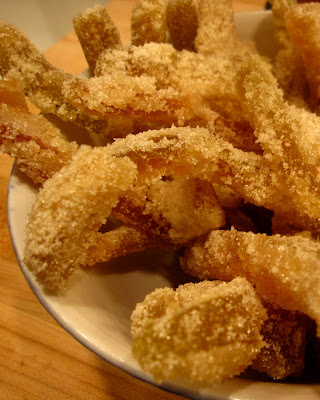