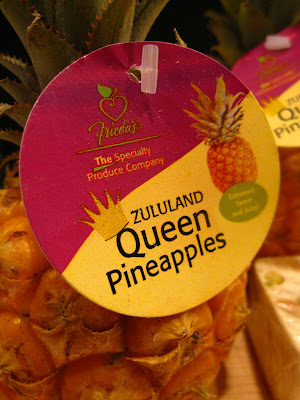 For my first attempt at recreating a remembered 'pudding' from childhood, I used Lyn McCallum's mother's recipe, which Lyn scanned and emailed to me from Cape Town. Her mom is 95. It seemed to embody the essence of all the recipes I have been sent since my request some posts ago, and for which I am very grateful. Thank you!

Click on the picture below for the recipe ( I did not line the dish with pineapple). 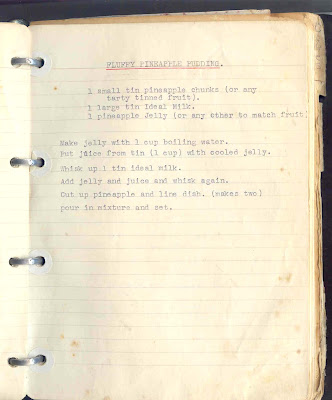 Ideal milk. Canned pineapple. Jello. Ingredients so wrong in terms of how we cook and think today that I was attracted immediately like a wet moth to a hurricane lamp.

So wrong they reminded me of the emergency rations I kept, as we were advised to, post 9/11. Imagining a sort of nuclear holocaust I bought everything in tins or dessicated. I even had fake ham in pink jelly. And fruit cocktail. I figured that in those dark days without power, hope or running water, I would need something to look forward to, and fruit cocktail seemed about right. It had those red cherries in it. I ate it all piecemeal and guiltily in the months that followed, as planes descended normally, as they constantly do, through the New York skies, and when I no longer started up in fear at the slightest noise overhead. 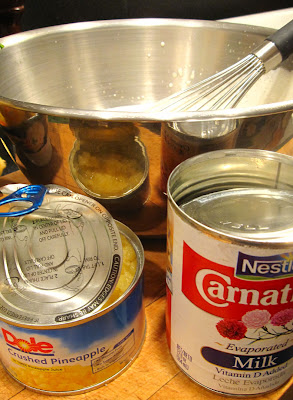 The evaporated milk I bought, hoping that it was the same as "ideal", was weird. A pale beige colour, and smelling the way I remember powdered milk; although why we drank that when I was little I don't know...perhaps in a game reserve, far from shops and refrigeration.

The instructions said to whip it, so I did, thinking nothing could come of it. But it did! An amazing, beige froth appeared, just like the crazy sea foam whipped up in a storm before Christmas last year in the Cape, and come onshore like a sea monster, houses-deep on the south coast. We saw the storm's remnants on a beach at Cape Point, below. 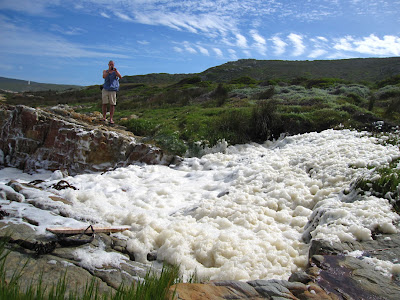 I made the jelly, which tasted fantastic, full of yellow dye and artificial flavours, added the pineapple juice, and added that to the milk, then the pineapple pulp, and poured them into my souffle dish, not being the owner of a pretty glass bowl. Sniff. 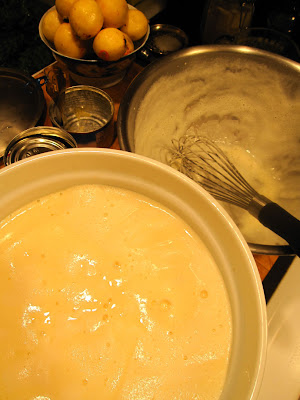 We had bowlsful after supper. We were in love. The texture was ethereally light and frothy. The flavour deeply pineapple-y. Like an uber-souffle from a very French book. A little of the canned milk flavour came through, and I decided to tinker next time and halve the quantity of milk, replacing it with whipped cream. 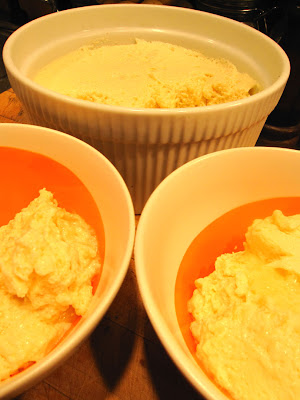 The cat adored it. It has knocked peach yogurt off the pedestal it occupied in his cat-dessert-heaven mind. He asked for more, got it, and wiped the bowl clean with his pink tongue. 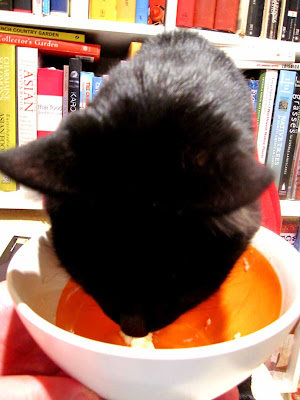 The Zululand pineapple in the first picture? I had to. My Auntie Doreen lived in Zululand. They were selling them at the Chelsea Market, only about 4" high and a mere $3.99 each. Yes, costly. Very sweet.

I cut them into scented chunks and served them with Pineapple Fluff Two, the one with whipped cream. But we ate so fast, there are no pictures.

Next time, I will puree real pineapple, strain its juice, whip cream, use gelatin and make...pineapple mousse. For it will no longer be pineapple fluff, and the whole point will have been lost.
Posted by Marie at 7:01:00 PM