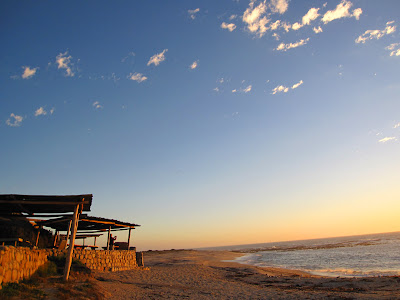 This was written originally for 66 Square Feet, but it bears repeating as a food event on this blog:

Muisbos (lit. mouse bush) is a shrub that grows on the West Coast. I think it is Lycium, but what species? Box thorn in English. Muisbosskerm, the West Coast institution, has walls made of dry muisbos, and a great sandy space inside where huge fireplaces cook fish, crayfish, skilpadjies (little tortoises) and pofadders (puffadders). More about those later. Don't worry. It'll be OK.

Muisbosskerm is right on the beach and has no neighbours. It's just the sand and the sea. You are warned in their online literature and publicity leaflets, which blanket Lambert's Bay, to be prepared to spend 3 hours at dinner. But we were actually whizzed through the whole process in just over an hour. Far too fast given the variety of foods we ate. A little contemplation of each plate would have been a good thing, instead of being hustled like a foie gras goose from course to course. All we needed was the funnel down our throats.

We took our last bottle of chilled Prosecco with us. South Africa has a long standing and liberal attitude towards BYOB. Muisbos has cottoned on to corkage though, which is fine, given the wine choices on offer. We sat, a little chilly, at a picnic table outside above the beach, beside two Afrikaans couples tucking into their brandies and cokes, and puffing away on a relay of cigarettes. From the other side of the stoep came American voices. Caught between my worlds.

We popped our cork into the sunset and felt good, drinking the bubbly grape juice, and toasting our escape from the hell of the Lambert's Bay camp site.

This was our only moment of repose.

If things had happened more slowly, I would have tasted everything, but as it was, we were rushed from dish to dish and I could not bear to clutter my plates with too many ill-matching tidbits, so I edited, severely, and came away very happy with what looked like the starring items. 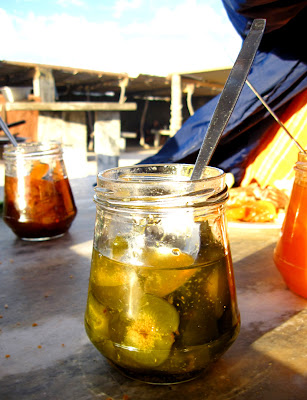 In an old mud oven the most delicious bread is baked. It is, in my life of eating, one of the best things I have ever eaten. I ate it here a long time ago, with my parents, and it was just as good now, eaten West Coast style for supper with konfyt, jam. Green fig preserves, moskonfyt (made from grapes), and apricot jam. The bread is slipped right from its baking tins onto the cutting board and covered with a clean white cloth. It's like something from a nineteenth century novel. 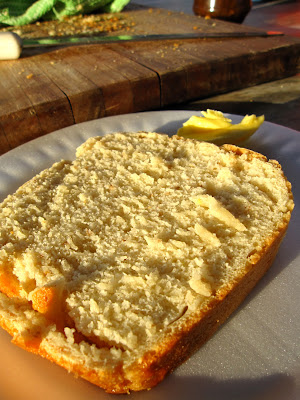 Steam rises as it is sliced. I could have eaten nothing more and been very happy. I think I ate 3 slices. Um...editing, yes. 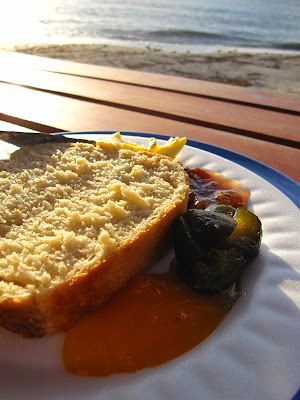 Back in the day crayfish was part of the menu. This is kreef coast, after all. Now it is an add on. You want crayfish you pay extra. So we shared one. It was good, and about a quarter of the size of the one we would have the next night, at Paternoster, straight off a boat. 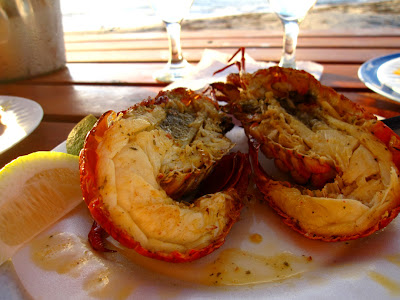 A friendly old man was the fish braaier that night, and he had one lady assisting him, though she dealt mainly with the bread and buffet table, and the bredies (which I was too stuffed to look at). I asked him the names of the fish on the braai and should have talked to him more, but felt shy. They must be so tourist-weary. We ate kabeljou, angelfish, snoek and I think he said stumpnose, which is more unusual. The angelfish was basted with apricot jam and lemon juce, another Cape tradition.

We ate with mussel shells as implements. 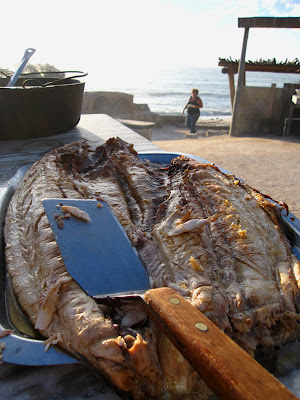 I was replete, at this point, but Vincent was brave and opted for the unmentionables.

Skilpadjies is netvet (caulfat) wrapped around lambs' liver. Pofadder, as our neighbour tried to explain to us, well into his third brandy and coke (also known as a swartvarkie - little black pig) was meat-stuffed grootderm (large intestine, I maintained), which he translated as "the pipe what goes into the stomach." I still say it's the pipe what leaves the stomach, but you get the drift...I had a bite of each and they were not bad, but when I start eating offal I need to know a lot about it, and I felt we had not been properly introduced. 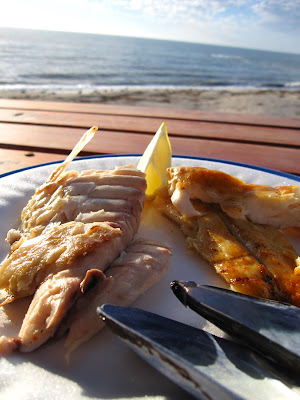 Dessert was koeksisters, predictably, and indifferent coffee. Also sliced watermelon, which was rather nice.

What really bothered me at the end of the evening were the four overstuffed trash bags filled with styrofoam plates. Each course warranted a different plate and all these plates are thrown away at the end of each meal! Ours was a modest group that night. I hate to think of how many bags are generated by a full house. Twice a day. It's unnecessary, and almost wanton.

Cheap enamel plates would preserve tradition and atmosphere and create some extra work for someone who could do with the dishwashing money. 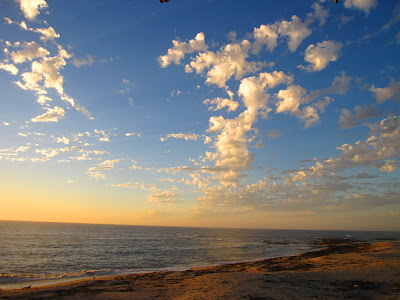 It is a tourist mill, to be sure, but it is well done. The fish is beautifully cooked and attention-holding and I would send people there and would go back myself...and the setting is beautiful.

Email ThisBlogThis!Share to TwitterShare to FacebookShare to Pinterest
Labels: Muisbosskerm