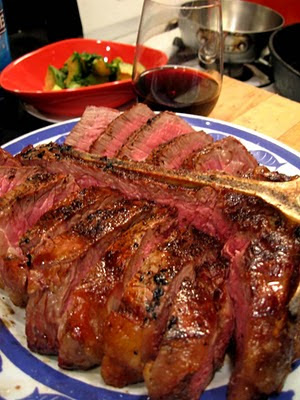 I am something of a steak snob. Which means I don't eat steak very often. At all. When I do buy it, it's usually a porterhouse, well-aged, and cut to order at about 3" (Yess'm, that's three inches) thick. It will cost about the same as a miniature dachshund puppy. No, really, it will be anywhere between $50 and $70 depending on provenance. Which is why I don't eat steak often. It will feed two very easily with leftovers, and three happily and four if you're polite.

And then I will fix it (hey, I'm in America) in the fancy steak house way that spawned my love of sliced-to-order beef with melted butter poured on top (the other reason I don't eat steak often: I will die, fast):

The steak should be at room temperature when you cook it.

First, a liberal salting on each side of the steak about half an hour before cooking (this may sound like heresy, but because it draws out the juice, said juice forms a crust very quickly when heat is sensed).

Second, a searing, searing, smoking-hot cast iron pan (no oil needed, this mamma is fat-marbled). Do not put the steak in the pan until it is blazing hot, because this needs to happen quickly. A minute on each side. Do not fiddle, just leave it there. Lots of smoke. Get the extractors or a draft going. Switch off the smoke alarm (remember to switch it on again, later).

Third, into the oven at the highest heat you have persuaded it to reach well in advance, 550'F/440'C at a minimum for...about 8-10 minutes. Very hard to be precise

The pan: it must be heavy, preferably cast iron. A thin pan cannot retain the heat required to do this at home.

And protect your hands. That pan handle, when you remove it from the oven, is going to be the hottest thing you ever laid hands on. I use a dry (damp and you're looking at the emergency room or a shattered pan or a broken floor or foot) dishcloth folded onto itself four times so it's thick. Oven mitts are no good.

To test for doneness: Prod it in the middle, firmly, with your finger. It should be slightly yielding for medium rare.

It's best to practise with smaller, cheaper steaks, until you get the feel for it. Or spread your one hand widely, palm up. With the index finger of the other hand prod the meat of your outstretched palm beneath your thumb. Now relax the stretched hand. Prod again. First was firmish, second was soft. You want something inbetween for medium rare. The steak will be dark brown with black bits on the outside.

You can also start a big steak on a well-ashed fire, and finish it in the oven, for that nice primitive taste.

Once rested (this is ESSENTIAL. Do not skip this part: at least 10 minutes, under tented foil, which allows some steam to escape) and the juices are back where they belong, each side is then carved from the bone into thick hunks and everyone gets a piece or pieces of each. And the juice.

I did this with some huge, allegedly aged steaks in Cape Town one year, purchased at the butchery at Pick 'n Pay Constantia, as a ritualistic Introducing-the-Husband-to-be-to-the-Brothers-Over-Charred-Meat. Total flop. The brother that showed up was fine with the husband to be and vice versa, they both fly things, after all, so what's not to like, but the steak?

Tougher'n leather. Not aged. At all. And the other brother? AWOL. (He remedied this six months ago.)

So here's an economical steak to start things off:

At Los Paisanos on Smith Street in Brooklyn, looking at the meat counter and deciding that $14.99/lb lamb rib chops were not for me, I see something that looks a little like a good steak. Not on the bone, a bit like a New York Strip. They were marbly, and really thick, about 2". I asked for two and when they had been weighed was asked to pay...$11. For two. Together.

I carried them home feeling as though I was about to be cheated. Maybe they were for stewing. 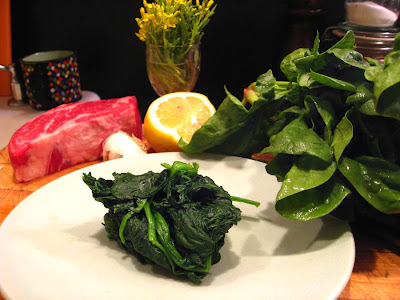 So, up there is one of my steaks, plus an illustration of what happens to spinach after it has been thoroughly wilted. That bunch made that ball. And below are my mizuna and arugula flowers sauteing with some butter and garlic.

I almost never cook with butter. It's fun. Your life flashes before your eyes. 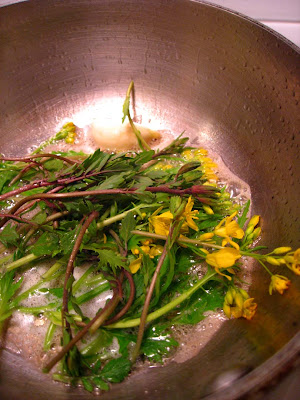 Same treatment, salt on each side, bloody hot pan, but no oven, as this steak was small. I cooked it about 3 minutes to a side. If a lot of fat spatters I tend to put a lid over it, and if you do be aware that it will cook much faster. I let it rest for five minutes then poured over my herbed butter (terrace thyme, parsley, oregano and lemon juice - it cooked a little too long till the herbs were caramelized) and sliced. Medium-rare and tender. I nearly wept. 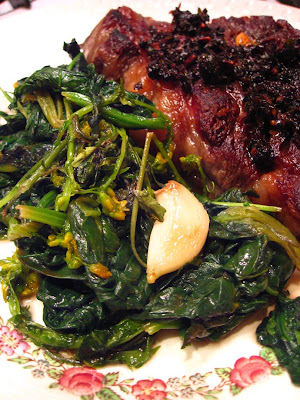 Email ThisBlogThis!Share to TwitterShare to FacebookShare to Pinterest
Labels: Steak