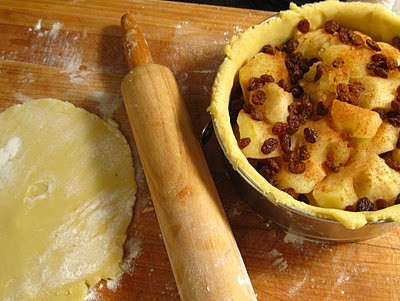 Here in the Northeast, it is time for apple picking and apple chewing and the smell of baking apples and warm pastry and a hint of cinnamon.

How blogs connect people: a few days ago I received an email from Lily, a Cape Town blogger, apropos of a comment I left on her blog about the bread at the Matjiesfontein Hotel. In her email were scans of clippings of recipes she had saved from the late 90's, from a House and Leisure magazine. She said: I've had this recipe clipping from a House and Leisure since 1996....it has three of my favourite recipes.

The recipes she sent were for Lamb with a Spoon, Molly Bolt's apple pie, and Phillida's bread, from the Matjiesfontein Hotel.

All three recipes are Maureen Viljoen's, published when she was the food editor of House and Leisure. And she is my mother. Lily, my emailer, had no idea. 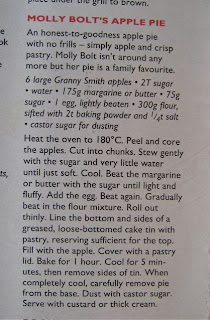 I grew up with Molly Bolt's apple pie. Its pastry is delicious, soft yet crunchy, and its apples simply allowed to be apples, with none of the sticky goop that one so often finds beneath an apple pie's crust. So there it is, fresh from its 1996 clipping. I remember my mother adding raisins to it, and,  independently of each other, Lily and I add raisins, and cinnamon, too. 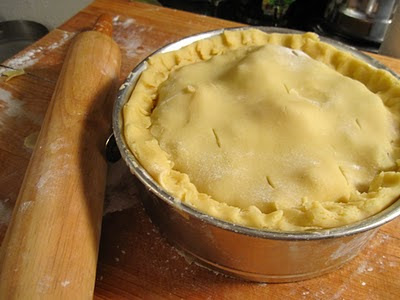 If you add raisins, it's a quarter cup, sprinkled on the cooked apples before you put the pie crust lid on. And a pinch of cinnamon.  You can also substitute self rising flour for the flour plus baking powder mixture. Needless to say,  I use butter - this recipe is a child of the 70's. My father still prefers margarine on his toast and bread, convinced by propaganda that transfats are better for his heart.

I wonder when that class action lawsuit will hit. 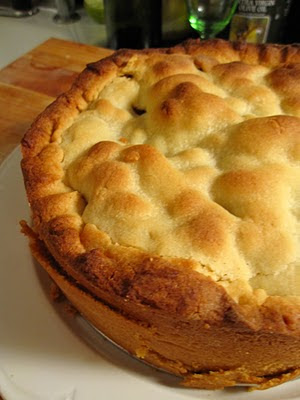 I made this pie with Spartan apples from the Carroll Gardens Farmers' Market, open on Sundays on Carroll Street between Court and Smith. 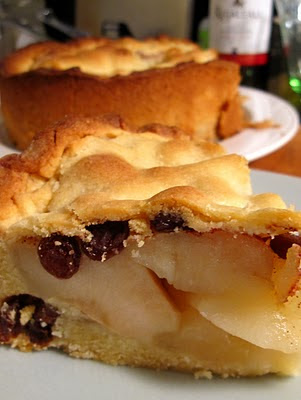