Tomato bredie cooked on the coals 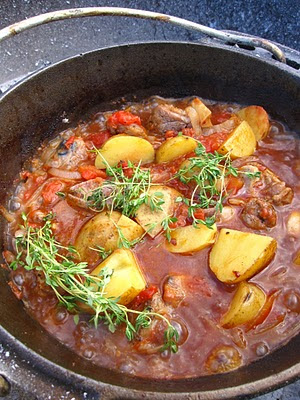 My first night of camp cooking, and my first night camping, ever, was a fiasco.
That was in 2009, on the Orange River, at the grassy and well run Abiqua River Camp on the Namibian side of the water. I started too late, only then realizing that darkness is...dark. I was still rattled by the bribe we had to pay at the border, but honestly I don't remember what else drove me to the state of near hysterics. Just the otherness of it all, I think. A complete lack of routine and familiarity with our mounds of supplies. The wind. A rickety, borrowed, camping kitchen table (subsequently abandoned for something smaller and sturdier, and cheaper).
I don't think I realized, then, how much camp cooking would grow on me. I love it.

So this delicious, rich bredie, made at the Mountain Zebra National Park, outside Cradock in the Eastern Cape, was my first employing fire. We had a sturdy cast iron pot (purchased obscurely at a mega store in Cape Town, the Ottery Hypermarket) which we'd used for making potbrood. But now I had some lamb knuckles (shank) purchased far north, in Aliwal North, and was determined to make potjiekos (paw-ee-kee-kaws - littlepotfood, the potjie or little pot refers to a cast iron pot, usually on three legs, for standing in coals).

We had onions and garlic - excellent camping staples, cans of tomatoes, peri peri rub, which I think was just the chile...and lemons. I always have lemons. 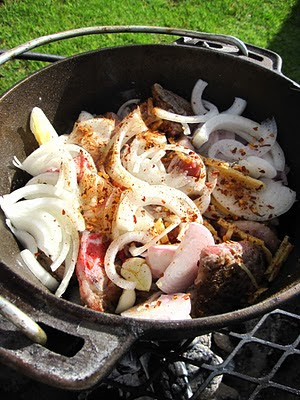 I made the fire early, as I reckoned it would take about three hours for the stew to cook, starting off on top of the coals, for browning and bringing the liquid to a boil, then later in the coals, as they cooled a little, to get the oven effect.

Over a large bed of red coals, heat the pot and add the oil.

While that's happening dust your shanks with flour, and season with salt and pepper. Add them to the hot pot and brown, turning once.

Add the onion and garlic, stir, let them colour a little, the peri peri or chile, and add the tomatoes, crushing with a spoon. Add the sugar, stirring well. Then add water to cover the meat. Let it come to a simmer. Stir again to catch the bits of flour sticking to the bottom. You may have to adjust the distance of the grid from the coals, depending on how hot they are.

Leave uncovered if the simmer is actually a boil, but if it is tame enough cover the pot, or compromise and leave the lid ajar. Leave it for about 40 minutes up here. Come back and taste the liquid, adding salt if you like.

At this stage add the lemon juice and the potatoes... 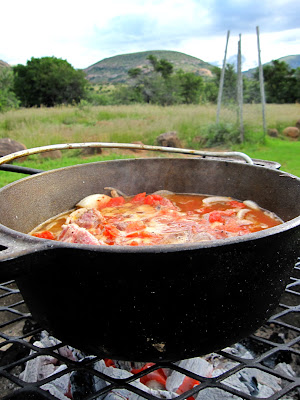 Then carefully transfer the pot into the coals themselves, arranging the hot coals around it, but not under it (it will get too hot). Put about 6 coals on the lid, too. 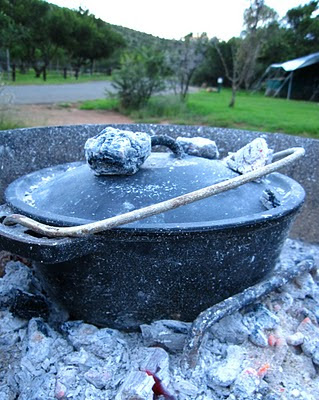 Come back after another hour, and carefully brush off the coals (you don't want ash in your stew). Check the liquid level. If it is still good, cover and go away again for 40 minutes. But if the liquid looks like it's dropped a lot and the lamb is bleating for water, add a cup. Cover, leave.

After a total of 2 1/2 hours it may be ready: the lamb must be fork-tender, the juice thickened and rich.Cooking longer won't hurt it, 3 hours, tops.

Red wine, candlelight, the odd bark of a jackal, and starlight. 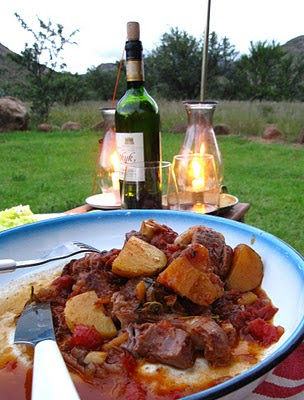