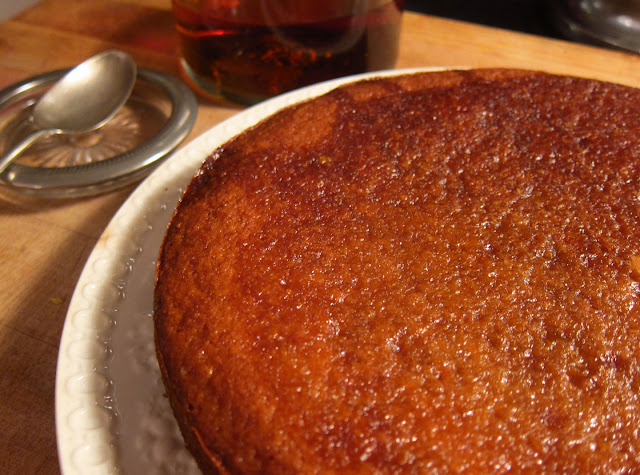 As luck would have it, I married a Frenchman whose three favourite foods in the world are: cheese fondue, boerewors, and...malva pudding. Ideally from Woolworths. The pudding, I mean. This version is the closest we can get, Stateside

After much research, the consensus seems to be that the "malva" in malva pudding comes from Malvasia dessert wine, which may or may not have been used in a sauce for this moist South African pudding. No matter how much I would like it to, it does not come from the Afrikaans word malva (from Malvaceae) referring to the rose scented Pelargonium capitatum, native to the the Western Cape. But that won't stop me from lining a baking pan with the leaves in Cape Town and baking the pudding on top of them...

It also seems that it really was popularized in South Africa by Maggie Peplar (Dave Peplar's late mother), who baked it in the 70's for the then-famous buffet at Boschendal. It is now found on countless menus.

So here, as promised, is the recipe I finally tweaked to our taste.

Cream the butter and sugar.  Add the egg, beat well, and add the jam. Slowly add the dry ingredients, mixing very well. Add the vinegar (there will be an exciting fizzing sound as it hits the batter) and then stir in the milk. Mix until smooth and pour into buttered 9" baking dish. It will not rise much more than 1 1/2 inches.

Bake for about 25 minutes or until springy to the touch. Remove from oven and turn out of its pan onto a plate.

Meanwhile, in a small saucepan,  melt 1 Tbsp butter and add to it 2 Tbsp sugar. Stir to dissolve and cook over medium heat until slightly syrupy. Keeping your eyebrows well away from the pan, add 3 Tbsp of brandy, bourbon, Grand Marnier or - Malvasia wine if you can find it! It will probably not catch alight but bear the possibility in mind.

Cook until nicely saucy and then pour at once over the still-warm pudding. Eat now or when cool. And it's best with some whipped cream or custard.