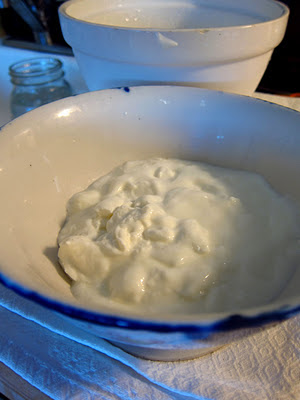 The first spoonful in my mouth and my eyes opened wide. The creamiest yogurt I have ever eaten.* Really. And it's mine! Mine, mine, all mine.

But this is not a new food. How has yogurt been made without electricity through the ages?

What about the hotbox method, I wondered, the way I make the Thanksgiving ginger ale pig. Sealing in the heat...

I bought a quart of Ronniebrook Farm milk. It is whole milk, and I chose the full cream kind. The milk itself is wonderful. And I think the quality of the yogurt must depend on the milk.

For my starter I used Fage yogurt.

1 quart whole milk (low fat works, too)
1. 5 tablespoons plain yogurt
1 sterilised mason jar with lid (or a clean pot that has a lid)

Heat the milk on the stove to the point where minute bubbles have begun to form at the edges. Turn off at once. Allow to cool for five minutes - too hot and it will kill the culture. Remove any skin that forms..

In a very clean bowl pour the milk over the yogurt, whisking to blend. Then pour into the sterilised glass jar (I sterilise it in the oven at 300'F for ten minutes, then cool). Screw the lid on, keep at a steady temperature for eight-twelve  hours, like this (for example):

Two feather cushions. One cashmere blanket. One wool blanket. Another for luck. Place the jar on the first cushion Wrap the two blankets around the jar and place the second pillow on top. Cover with another blanket. 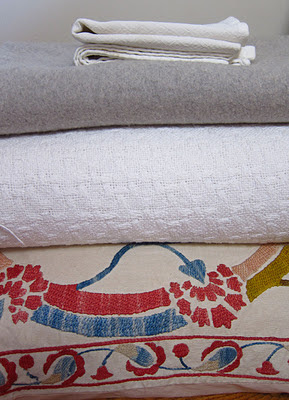 In Cape Town my mother's hotbox is a cardboard box with two bean bags inside. The bean bags insulate whatever pot is sandwiched between them.

After eight hours the yogurt should be set. When I use more milk the wait is bit longer.

Now I strain it to make it very thick. Line a sieve with muslin, double thick, or a very clean cloth, and place the sieve over a bowl. Put the yogurt into the sieve, cover with a damp cloth, and put in the fridge till much of the whey has dripped through. It takes many hours. It forms a pale yellow pool in the white bowl. Why do I think that George Eliott heroes liked a draft of cool whey on a hot day?

I left mine overnight, which yielded an intensely creamy Greek-style yogurt. Use a low fat milk if the cream is off-putting, or strain for less time.

When it's done, store in covered bowl. Now bring on the chestnut honey. Bring on the last of the wine-poached plums. Bring on the garlic, for that matter. And the crunchy, omega-3 purslane leaves, the diced cucumber and the lamb curry.