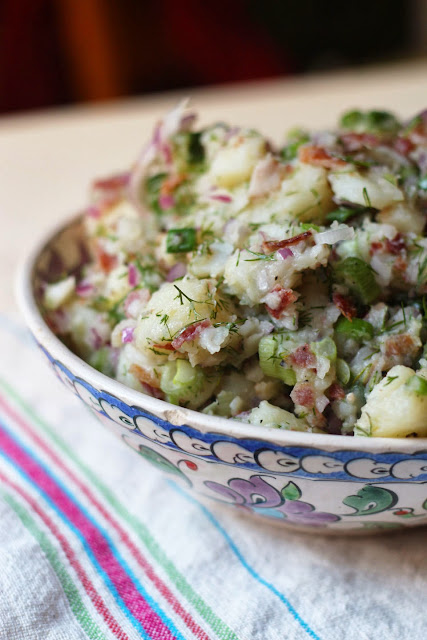 My friend Mimi said she was making a ham. The ginger ale ham, no less (see my book, November chapter). So I felt that that called for potatoes. And against the sweetness of the ham and its fluffy mustard sauce, I wanted something sharp. The sorrel is not ready yet on the terrace, so sharp meant vinegar.

To emphasize the hamminess, a handful of crumbled, and crispy bacon.

And with whiskers of dill (the dill is an idea - it must not dominate), there you have a German potato salad.

There are no tricks, other than adding the vinegar to the potatoes while those are still warm. The salad itself is eaten at room temperature.

Cook the halved potatoes in salted, boiling water till tender.

While they are cooking, heat the oven to 400'F. Lay the bacon slices on a roasting tray and slide them into the hot oven till crisp, about 10-15 minutes. Drain them on paper towels when done, and then break into small pieces. Save 2 Tablespoons of the rendered bacon fat.

When the potatoes are tender, drain them, peel them, and drop them into a large bowl. Slice each potato piece quite thickly.

Dissolve the salt and sugar in the vinegar, and pour onto the still-warm potatoes. Toss well. Add the saved 2 tablespoons of bacon fat, and the nut oil. Add freshly ground black pepper, and toss again (don't worry about smooshing the potatoes).

Add the finely chopped red onion and scallions, and the dill. Toss well. Taste. I like a very powerful blend of seasonings for this salad - you may want to shake some more vinegar over the top. Add the bacon last, and toss one more time. Transfer the potato salad to a serving bowl.

And there it is.

(I could see this for a late breakfast, with a poached egg plopped on top of the quickly warmed leftover salad. Heaven, with coffee...Or quick potato cakes, with strips of smoked salmon, or gravlax?)