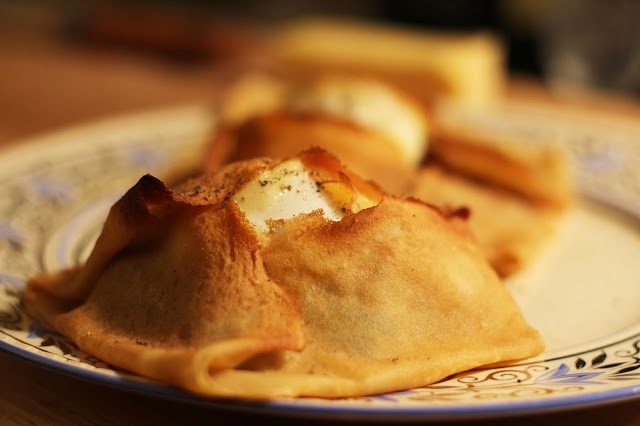 "Some assembly may be required."

But, hey. At least you didn't have to stand in the Ikea checkout line first, with those meatballs stirring uneasily in your belly. And you resisted the cinnamon bun scent wafting over the cash registers!

I ate crêpes like these a million yeas ago, during a cold December in Geneva. My daily haunt was the opera house in the middle of the fast-flowing Rhône as it emptied into Lac Léman. And after that we ate. Enough to put me in debt. The crêpes were at least reasonable in terms of budget. The truffles and the oysters? - not so much.

At the crêperie you stood outside a steamed window on a cobblestoned plaza where unbelievable spring flowers were sold, and asked for your crêpe, and it was made for you as waited, handed to you on a piece of cardboard with a plastic fork, and off you walked, breaking off bites with the fork, Gruyère melting in strings and egg yolk running

In the spirit of pre-assembled parts, let's say you got your hands on some well-made crêpes. In New York, I am happy if I find Naked Crepini, and I buy extra and freeze them. They really are very good. If you can't find good ones, buy the Roux Brothers' book on Patisserie. It is a classic, and it taught me much of what I know about pastry (including puff...). Their crêpes a la Daniel Pinaudier are the best you will ever make, or eat.

But I'm not telling you how to make crêpes. I'd like to, but I have my limits. 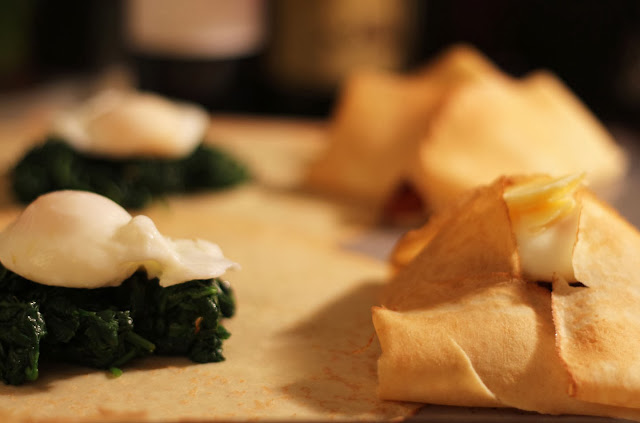 There are endless variations to what you can parcel inside this gossamer wrapping. But I always include a just-cooked, poached egg. Life is better with runny egg yolks. The variations include grated cheese, wilted greens (spinach, arugula, pigweed, lamb's quarters, pea shoots, and so on), crispy bacon or silk-thin ham, or sauteed mushrooms, or caramelized ramps, or melted anchovies, or shavings of bottarga, or, or...

But always the egg.

Let's say there are two of you.

Poach your eggs two by two in gently boiling and salted water, turning them over as soon as the white has congealed on one side. As soon as the other side is set, lift them very gently with a slotted spoon and place on a kitchen towel or paper towel to drain. You can do this in advance.

On a lightly greased baking tray that will fit four folded-up crepes, spread one pancake.

- If it's cheese, place an egg dead center, top with a 1/4 portion of cheese and season with pepper and a little salt. Fold the crêpe, one side at a time over the filling. A neat parcel will require four folds.

- If it's ham or bacon, it's up to you. For bacon I like the egg to be on top. For soft ham, I like the ham to be on top. Again, divvy up a 1/4 portion of the pork product, breaking the crisp bacon to fit,  between four crêpes. Season with pepper, and go easy on the salt. 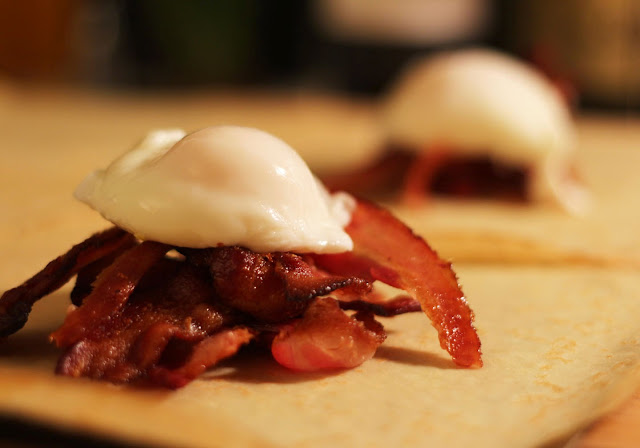 - For wilted greens, do make sure they are wrung dry, first. Nothing worse than a soggy crêpe. Place a 1/4 portion of the greens in the middle, and top with that egg. You may sprinkle some cheese ever the top! Season. (Add a slice of thin smoked salmon, for that matter. And a dollop of Hollandaise sauce! But I am overreaching...)

- For ramps, curl the wild onions beneath the egg. Season. (Go wild with some anchovy butter over that, if you like.)

- For anchovies, you could melt them first, in a saucepan with two tablespoons of butter. Otherwise, drape a fillet over the poached egg. Wrap.

- For bottarga, sprinkle the very finely grated or microplaned bottarga over the egg. A slug of truffle oil makes this stratospherically good.

Slide the tray with the four crêpes into the hot oven and leave it there for five minutes. This is enough to melt the cheese, warm the ham and egg, dissolve the anchovies, etc.

Slide out, scoop onto warm plates, and eat at once.

This really is quicker than it sounds. Just make sure you have everything ready in advance. And the result is wonderful; the first knife-pass through the crunchy, yielding, melting mass will convince you of that.