Pork shoulder with anchos and orange 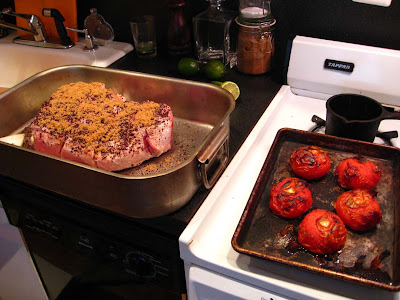 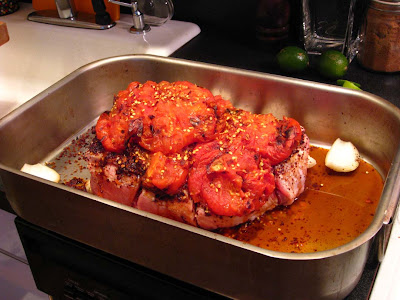 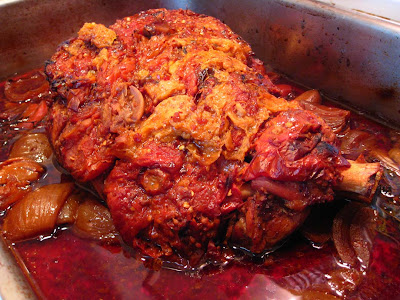 Eric had five helpings. He may have had six. It's a bit like War and Peace. I can't remember whether I've read it six times. It may be five or it may be seven. If I read it first in 1994, and it's fourteen years later, once every couple of years...it could be seven. Or six, since I could almost read it again. The point is, after the fourth time, does it matter? I kept telling him he'd be sick, but was very happy to keep spooning out meaty pieces from the large clay bowl where the pig, long fallen from its bones, was lying in the dark sauce of ancho, tomato, caramelized onion, Turkish dark pepper, lime, orange, thyme, brown sugar, pepper. With full-fat, organic sour cream to grace its rich, sweet, peppery corners, it was a bowl of very delicious pork.

The idea (pig/orange/tomato combo) came originally from Diana Kennedy's The Art of Mexican Cooking. Then I winged it.

One pork shoulder, skinned and slashed deeply (2")
5 tomatoes, broiled till black (8-10 mins. -it sweetens them), keep skins on [if you must, sub. 3 Tbsp tomato paste, and add a cup of water]
2 yellow onions, quartered
Half a head of garlic, cloves peeled and flattened
2 oranges, juice squeezed and pulp reserved
2 limes or lemons, juice squeezed
4 ancho chiles, soaked in boiling water, then sliced into ribbons. Remove stalks, keep seeds.
2 Tbsp brown sugar
I also sprinkled over 2 Tbsp of dark red Turkish chile (sweet/salty/hot) bought in the bazaar in Istanbul. I don't know where one could find it, here.
salt, pepper
5 stalks thyme [or oregano]

In a deep roasting dish, season surface of slashed pig with salt and pepper and all the sugar, put tomatoes whole on top of shoulder and squash down till thickly pulped. Pour orange and lime juice over, and add any orange pulp. Scatter onion, garlic, sliced anchos and seeds, and thyme or oregano all about the pan. Cover and put in fridge overnight to get acquainted.

Come back at about 6pm and uncover your pig. Pour the significant amount of cooking liquid into a saucepan and reduce until you have about two cups. You may want to add some lime juice or salt or sugar, or another ancho. Make sure there are no stray bones lurking. If you have a blender, blend the sauce till smooth and return to heat to keep warm. Meantime place pig in serving platter. Pour over sauce. Serve in bowls, with sour cream.

Eric said that this is better than the Ginger Ale pig. Mimi looked shocked. Blasphemy.

Preceed with guacamole, accompany with margaritas and follow with mangoes. 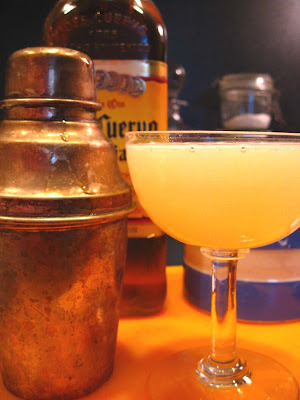 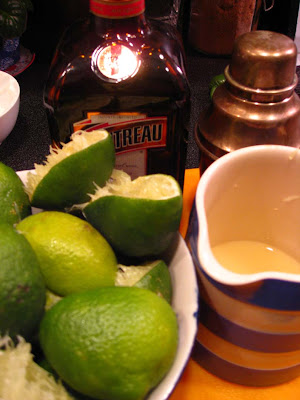 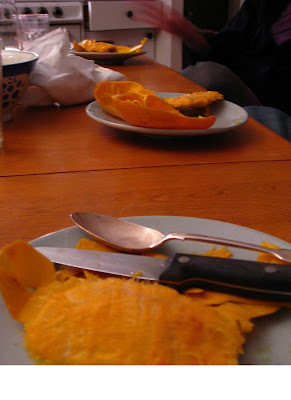 Email ThisBlogThis!Share to TwitterShare to FacebookShare to Pinterest
Labels: Pork shoulder with anchos and orange