A previously posted recipe revived at a time of year when one's thoughts turn to a South African spring.

Sometimes the best you can do - under the circumstances - is eat fried chicken.


It came to me later this evening, as sizzling came from the oven - so it wasn't fried, actually - that Dana Snyman was the reason I was about to eat crispy chicken pieces, on a hot Thursday night, while processing an IRS-related shock to the system, and thinking about consequences, in general.


This afternoon, on my way home to Brooklyn, I was reading the August edition of Go! a South African travel magazine whose great talent it is to visit small, affordable places and make them big, so big that your homesick heart overflows and you're practically weeping on the subway.

The story, by Dana Snyman, was When It Rains On the Knersvlakte, and sounds to my ear like English translated from Afrikaans. Go! is published in Afrikaans, too: Weg! Dana writes in Afrikaans.

"I pulled off [the road] next to a man walking northwards, who said he didn't want a lift. His name's Duncan Evans, he said. He wore a brown slipper on the one foot and a ragged tackie on the other, and with him he had a plastic bag with a bottle of water, a single sandal, a jersey and a dog-eared Hustler.

At Rooiberg I ran into Jan Louw - with Pote [Paws], his dog. Almost immediately Pote lifted his leg against the wheel of my car. The wind blew so hard that the jet almost missed its target. Jan farms with goats and sheep. He explained to me exactly where the Knersvlakte begins and ends: it stretches more or less from the Gifberg in the south, past Vanrhynsdorp to Nuwerus and Kliprand in the north. To the east, it borders the Bokkeveld Mountains and to the west it borders on, well, "the dear Lord's mercy". That's how Jan Louw described it. I guess it's another one of those places of which the borders lie in people's hearts rather than on a map.

I start driving back. At the T-junction with the N7 a man next to a white Uno with Namibian plates waves me down. I stop and he approaches the car. Thank goodness the conversation isn't about weather.

Do you know whether there's a Kentucky Fried Chicken in Springbok?

I want to buy my wife one of those big family barrels.

His name is Jan Opperman. He's a retired road grader from Keetmanshop. Once a year he leaves his wife at home, gets in the Uno and explores the places that he dreamt about during those years, sitting on the grader. But this wind is now driving Jan back home. He's only going to stop in Springbok for that family barrel - R149.90, VAT included - and then he's going straight home.

No, he assures me, as we take our leave, nothing will happen to the chicken in the car from Springbok to Keetmans. "It's only a six hour drive."

Later, in the story, it rains. What they have been waiting for. Rain on the corrugated iron roof. And now, in Brooklyn too, thunder rumbles and distant cumulus towers light up from within like wind-warmed coals and rain is falling on the skylight. My heart is far away. West and south, and homesick for the person and the place. Last year this time I had not met this man, yet, and from little hotels and guest houses far from cyber connections, in the depths of the Northwestern Cape, I wrote him a serial letter, looking forward to the 21st of September when we would first clap eyes on the real other, in the flesh, telling him about our travels the flowers, the water, everywhere in the desert.

So tonight I made fried chicken. Except I didn't. You could say it was baked.

You need, to feed Two with leftovers:

Mix the buttermilk with salt and garlic in a wide bowl. Add the chicken pieces, turn to coat and allow to marinate for a minimum of one hour. Overnight would be optimal.

Mix all dry ingredients in a bowl, and turn out into  a big plate.

Remove the chicken pieces from the buttermilk or yogurt, drip off the excess liquid and dredge in the spicy flour mixture. Pat as much on as will stick. Arrange the chicken pieces in a flat roasting pan so they don't touch each other, and slide into the hot oven for an hour till very brown and sizzling. You can turn them at half time.

Eat with cool red wine and watch My Name Is Nobody. Later, you might want beans. 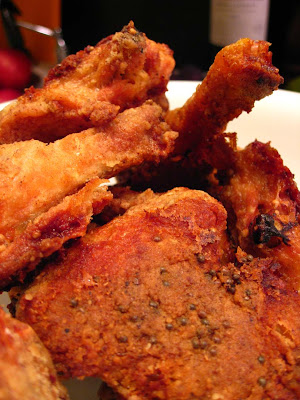 In 2006 and 2007 my mom and I drove to Kamieskroon and then through Springbok on our way to Nababeep to see its orange daisies. We drove through the apparently barren, succulent-rich Knersvlakte on our way to Nieuwoudtville, flower capital of the world, high on its plateau. If there is any way in the world you can get yourself there, go. It is a thing to do while you are on this planet. You will never forget it. 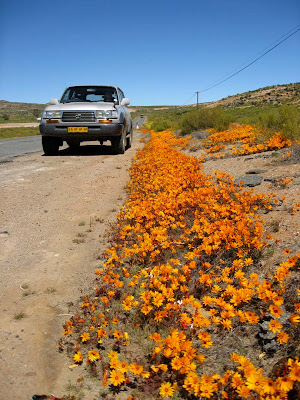 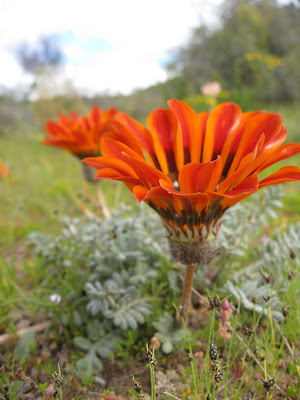 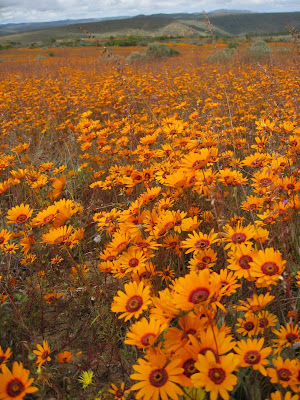